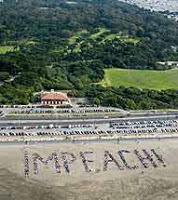 from raw story: A poll published Tuesday shows that close to 40% of Americans favor the impeachment of President George W. Bush and Vice President Dick Cheney, according to an article at Townhall.com.

"Few serious observers think things will ever get to actual impeachment. And yet the American public seems more open to the concept than many imagine, according to a new national poll," wrote Matt Towery, CEO of InsiderAdvantage, which commissioned the poll. "The implications of this public sentiment could be huge for the 2008 presidential elections."

The poll from InsiderAdvantage/Majority Opinion asked a sample of 621 Americans, "Would you favor or oppose the impeachment by Congress of President George W. Bush and Vice President Dick Cheney?"

A total of 39% who answered said they favored impeachment, according to Towery. In opposition were 55% of respondents, with 6% answering undecided or don't know. There was a 4% margin of error.

"Forty-two percent of independents want Bush and Cheney impeached. These aren't just voters who disapprove of the White House. Instead, they're for initiating a process that could remove them from office," he wrote.

InsiderAdvantage has "been praised by national media ranging from CNN’s Judy Woodruff to Fox News’s Bill O’Reilly, and have appeared in Knight-Ridder newspapers, The Washington Post, Washington Times, New York Post, Business Week, US News and World Report, and CBS News/CBS Marketwatch," according to the company's website.

Towery's full article can be found at this link.