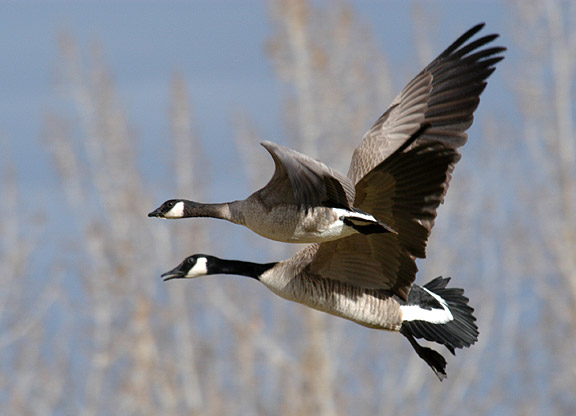 But
the geese ate the experimental wheat last summer at the Experimental
Farm. Geese are voracious eaters and leave droppings every few minutes.

The
fear is that these geese may have left poop with living GM wheat seeds
that could allow GM wheat to spread outside the controlled field, or
even away from the farm itself.

The issue blew up on a Friday night in 2012, taking the department by surprise.

Now
the Citizen has obtained internal emails, with many of the relevant
details blacked out, showing the rush by federal bureaucrats to find out
whether the GM seeds had flown the coop, potentially to other farms.

GM
wheat is not approved in Canada. Many growers, including the Canadian
Wheat Board, strongly oppose it, saying that growing GM wheat will make
all Canadian wheat harder to sell in Europe and Asia.

And the last thing any grower wants is to have ordinary wheat crops accidentally mixed with the GM varieties.

This
happened last month in Oregon, where a farmer discovered transgenic wheat growing on his land. He had never planted any and the source
remains unknown, but Japan and South Korean briefly banned U.S. wheat imports.

Many species of plants are commonly spread when birds eat berries or nuts and then drop the seeds in their feces.

The issue seems to have come out of left field for the Experimental Farm.

The CFIA regulates trials of experimental GM crops.
Its records show that in 2012, Agriculture Canada had two permits to run
“confined research field trials” of experimental wheat in Ottawa.

These
are outdoor trials where strict controls are intended to minimize the
chance of DNA introduced by humans from escaping to the environment.

These
trials are reserved for GM crops; crops where the DNA is altered
through human-induced mutations (often with chemicals or radiation); or
conventionally-bred crops that are so genetically different from those
in the environment that they can’t be allowed to mix.

CFIA refused to answer questions about the incident Tuesday.

Agriculture
Canada emails show the department had to scurry to find out whether GM
wheat seeds “will survive in the goose ‘poop’.”

On the following
Monday, Agriculture Canada produced a list of “talking points” designed
to make the problem look minor if the public found out.

This list
concludes that “the dispersal of viable seed by urban and suburban
populations of Canada Geese is minimal,” and adds that the seeds are
spring wheat which “would be killed by the winter frost.”

The
experimental wheat was surrounded by rows of ordinary wheat in the
field, a standard technique in GM tests to keep the genetically modified
DNA from spreading beyond the field.

The geese ate both kinds, meaning only some of the seeds they spread were genetically modified, the talking points note.

“So
in reality, only a small population of the geese probably fed on very
little material resulting in much dilution ...” The rest of the talking
point is blacked out.

An Agriculture Canada spokesman echoed those
talking points Tuesday, confirming that the wheat was an experimental
variety designed to resist fungus, and adding that “the latest research
indicates that there is minimal risk of dispersal of viable seeds
through Canada geese droppings. Additionally, since the seeds were a
spring wheat cultivar, even if the seeds were to survive a goose’s
digestive system, they would be killed by winter frost.”

The
experimental wheat contains a collection of genetic material called GLK1
which can help a variety of plants resist fusarium, a destructive
fungus that affects many grains.

Last year Canada geese destroyed
some $250,000 worth of experimental crops at the Farm. This year the
Farm hired a company that uses border collies to stalk the geese and
eventually drive them away.