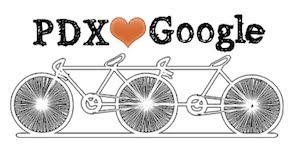 from ars technica: The City of Portland, Oregon says it's ready to be one of Google's test run fiber-to-the-home projects, and how: "No city in the USA is as ready as Portland to launch a citywide or scaled test bed for ultra high speed open platform broadband," its response to Google's Request for Proposals proudly declares. "Portland has the history, broad community support, willing businesses, committed local government, and cost-effective, year-round construction metrics."

As we've reported, Google says it's planning to roll out and test "ultra-high speed broadband networks" in various trial areas around the United States. And they sound pretty darned ultra: one gigabit per second, fiber-to-the-home connections "at a competitive price" to cities and regions of 50,000 to ten times that many people.

Portland says if you build it, we will download. But beyond that, why should Google choose that rainy northwestern city where people prefer to rust rather than tan?
Here are some answers the RFP gives.

First, hardcore telecommuters, Portlanders like to work at home, or "over Wi-Fi in coffee shops, or in co-working spaces," the RFP notes. In fact, "nine Portlanders telecommute for every one who commutes by light rail." Plus it's a small business city—within Multnomah County, three out of four businesses have ten employees or less.

Next, Portlanders are huge long-term planners of the green variety. This was the first city to embrace a plan for global warming, the document adds. Its emissions levels have dropped 14 percent while national emissions continue to go up. The town already serves as a test site for sensor nets, telemedicine, and advanced geolocation services.

And Portland "was the first government in the nation to endorse 'open access' requirement to then-emerging broadband Internet platforms," doing so back in December of 1998. Google's project, it should be noted, will be open access—letting users choose from a variety of ISPs.

This all sounds pretty competitive to us (we, of course, aren't making the decision). Applicants had until March 26 to make their move; as cities now reveal their applications, everyone else can see what they are up against. Google may take until the end of this year to make its decision.