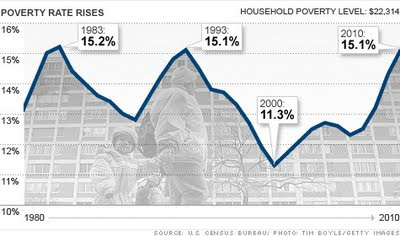 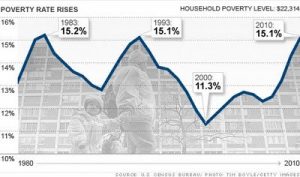 from cnnmoney: Amid a still struggling economy, more people in America fell below the poverty line last year, according to new census data released Tuesday. The nation's poverty rate rose to 15.1% in 2010, its highest level since 1993. In 2009, 14.3% of people in America were living in poverty. "The results are not surprising given the economy," said Paul Osterman, a labor economist at MIT. "You would expect with so many people unemployed, the poverty rate would go up. It's just another sign of what a difficult time this is for so many people." About 46.2 million people are now considered in poverty, 2.6 million more than last year. The government defines the poverty line as income of $22,314 a year for a family of four and $11,139 for an individual. The Office of Management and Budget updates the poverty line each year to account for inflation.