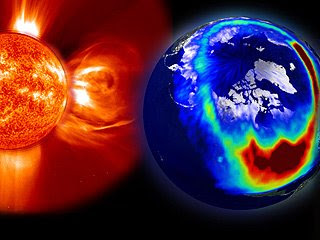 powerful solar storm could shut down US for months

from fox news: A new study from the National Academy of Sciences outlines grim possibilities on Earth for a worst-case scenario solar storm. Damage to power grids and other communications systems could be catastrophic, the scientists conclude, with effects leading to a potential loss of governmental control of the situation.

The prediction is based in part on a major solar storm in 1859 that caused telegraph wires to short out in the United States and Europe, igniting widespread fires. It was perhaps the worst in the past 200 years, according to the new study, and with the advent of modern power grids and satellites, much more is at risk.

"A contemporary repetition of the [1859] event would cause significantly more extensive (and possibly catastrophic) social and economic disruptions," the researchers conclude. When the sun is in the active phase of its 11-year cycle, it can unleash powerful magnetic storms that disable satellites, threaten astronaut safety, and even disrupt communication systems on Earth. The worst storms can knock out power grids by inducing currents that melt transformers.

Modern power grids are so interconnected that a big space storm - the type expected to occur about once a century - could cause a cascade of failures that would sweep across the United States, cutting power to 130 million people or more in this country alone, the new report concludes. Such widespread power outages, though expected to be a rare possibility, would affect other vital systems.

"Impacts would be felt on interdependent infrastructures with, for example, potable water distribution affected within several hours; perishable foods and medications lost in 12-24 hours; immediate or eventual loss of heating/air conditioning, sewage disposal, phone service, transportation, fuel resupply and so on," the report states.

Outages could take months to fix, the researchers say. Banks might close, and trade with other countries might halt. "Emergency services would be strained, and command and control might be lost," write the researchers, led by Daniel Baker, director of the Laboratory for Atmospheric and Space Physics at the University of Colorado in Boulder.

"Whether it is terrestrial catastrophes or extreme space weather incidents, the results can be devastating to modern societies that depend in a myriad of ways on advanced technological systems," Baker said in a statement released with the report...

The race is on for better forecasting abilities, as the next peak in solar activity is expected to come around 2012.

from space.com: Space is typically thought of as a very quiet place. But one team of astronomers has found a strange cosmic noise that booms six times louder than expected. The roar is from the distant cosmos. Nobody knows what causes it. Of course, sound waves can't travel in a vacuum (which is what most of space is), or at least they can't very efficiently. But radio waves can. Radio waves are not sound waves, but they are still electromagnetic waves, situated on the low-frequency end of the light spectrum. Many objects in the universe, including stars and quasars, emit radio waves. Even our home galaxy, the Milky Way, emits a static hiss (first detected in 1931 by physicist Karl Jansky). Other galaxies also send out a background radio hiss. But the newly detected signal, described here today at the 213th meeting of the American Astronomical Society, is far louder than astronomers expected. There is "something new and interesting going on in the universe," said Alan Kogut of NASA's Goddard Space Flight Center in Greenbelt, Md.