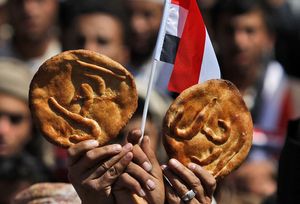 from independent: Revolution is breaking out all over. As Gaddafi marshals his thugs and mercenaries for a last-ditch fight in Tripoli, several died as protests grew more serious in Iraq... And it's not just the Middle East. This is an African crisis: Tunisia, where it started, is an African country, and last week in Senegal, a desperate army veteran died after setting fire to himself in front of the presidential palace, emulating Mohamed Bouazizi, the market trader whose self-immolation sparked the revolution in Tunisia... Nowhere is immune: dozens of activists in China are in detention or under other forms of surveillance, and the LinkedIn network was shut down as authorities seek to stamp out Middle East-style protests there.

Nowhere is immune to this wave of rebellion because globalisation is a fact; all the world's markets are intricately interlinked, and woe in one place quickly translates into fury in another. Twenty years ago, things were more manageable. When grain production collapsed in the Soviet Union during the 1980s and what had been one of the world's greatest grain exporters became a net importer, the resulting surges of anger brought down the whole Communist system within a couple of years – but stopped there. Today there are no such firebreaks, and thanks to digital communications, events happen much faster. Why are all these revolutions happening now?