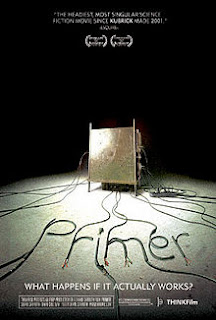 Primer is a low budget science fiction film that won the grand jury prize at the Sundance Film Festival in 2004. A film produced and directed by Shane Carruth, who is also a main character with David Sullivan in a highly cerebral time travel drama filled with existential and moral issues. The plot begins with group of entrepreneurs looking to make fortunes with a product made in Aaron's garage. Abe (Sullivan) and Aaron (Carruth) stumble later upon a near self-sustaining energy source (box pictured), and suspect, something more occurs when a fungus with advanced growth accumulates inside. Abe first discovers in experiments with watches it's a time machine. The dialogue is scientifically-challenging but well-done, and perhaps, film's most impressive aspect. Time travel concept revolves around points A and B from the time box first turned on until they emerge from box (point B), many hours later, returned to point A. Abe observes energy source in box, requires about 1300 attempts to bring point B back to point A. You can get up to speed here: Time Travel in Primer. The remainder of plot centers around preventing an altercation at a party that results finally, after some replays with gun-toting perpetrator in custody. It's implied Aaron feels responsible since he inadvertently invited perp to the Monday night party. There are way too many Mondays for this viewer.  The film may not be completely coherent or consistent in its time travel script device, but concept is solid and executed well enough to be impressive. You will watch the film more than once in attempt to understand it better. Primer has gained cult status over years and you may view why here! There's a video, "Primer Movie Explained," helpful in comprehending plot. There's also a webpage explaining script. A sophisticated script with fail safe procedures and time-looping action, makes for great film in under 80 minutes!