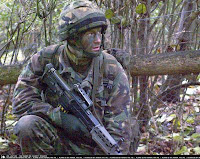 prince harry off to iraq

from new york post: Prince Harry will soon be off to war in Iraq - and this time, he'll be wearing proper British military gear and not a Nazi uniform.

The young royal reportedly will head to Iraq with his unit in May.

Harry will be stationed near the southern port city of Basra, and will likely be assigned to patrol the border with Iran.

The Daily Telegraph said Harry is determined to go, despite reports of resistance from many in the military who fear the prince would be a fat prize for terrorists. 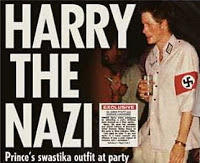 They're also worried that Harry - who had to apologize publicly for wearing a Nazi uniform to a costume party in 2005 - would attract attention and put his fellow soldiers in greater danger.

The Telegraph said officials are trying to figure out how they can minimize the dangers, but not give Harry special treatment.

With a rank of cornet, which is like a second lieutenant, the 21-year-old will have a command of 11 men and four light tanks, the Telegraph said.