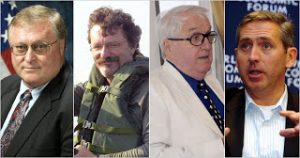 from danger room: Did a Pentagon official set up his own rogue intelligence operation in Afghanistan? And did he divert cash from an open-source cultural research program to do it? The top national security story of the day in today’s New York Times raises more questions than it answers.

Here’s the short version: Dexter Filkins and Mark Mazzetti of the Times tell the story of Michael Furlong, a defense official reporting to U.S. Strategic Command who may have hired private security contractors to serve as his own personal “Jason Bournes” to collect targeting intelligence in Afghanistan and Pakistan. And in a particularly interesting twist, he may have used money intended for a military-funded newsgathering operation as his own slush fund.

The whole scheme, apparently, irritated the CIA – and may have crossed the line into contract fraud, if the Times account is correct. But it also sheds light on some lesser-known players like International Media Ventures, a “strategic communications” firm that seems to straddle the line between public relations, propaganda work and private security contracting. “Strategic communications” firms have flourished in the strange new post-9/11 media environment.

3/18 Warwhores Updates:
Oil?! We’re here for the heroin! (at $19,923,200 per barrel!)*
The war on terrorism is a racket!*
Would US troops fire on Americans?*
Indonesian Police & military conduct massive joint anti-terror drills*
Video: US marines using live-fire during S. Korean drills*
Pentagon propaganda machine rolls on in Afghanistan*