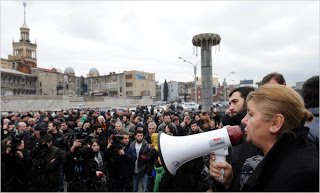 Georgia: Simulating war or provoking it? 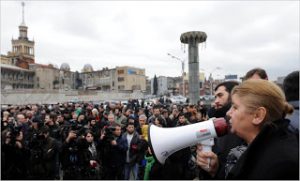 from reuters: Panic gripped Georgia on Saturday when a pro-government television station broadcast a fake report that Russian tanks had entered the capital and President Mikheil Saakashvili had been killed.

Imedi TV introduced the report as an "imitation of possible events," but the warning was lost on many viewers as mobile phone networks crashed and residents of Tbilisi rushed into the streets.

The report thrust the ex-Soviet neighbors back to August 2008, when Russia crushed an assault by U.S. ally Georgia on the rebel region of South Ossetia in a five-day war and sent tanks to within 45 km (28 miles) of Tbilisi.

The Georgian Interior Ministry said the report, which did not carry a banner saying it was a hoax, caused "great panic." A cinema in Tbilisi emptied as parents called their children home, a frantic filmgoer said.

Russian Interfax news agency flashed the report on the "alleged" but unconfirmed entry of Russian tanks and death of Saakashvili, and Moscow's Echo Moskvy radio station interrupted its regular programing with the 'news'.

Switching to a live talkshow, the anchor apologized for any panic the report had caused, saying: "We just wanted to show what the worst day in Georgian history might look like."

The report was a barely disguised swipe at opponents of Saakashvili who recently met Russian Prime Minister Vladimir Putin in Moscow and called for the countries to restore ties.

Georgy Arveladze, head of Georgia Media Production Holding which owns Imedi, told Reuters the aim was to show the "real threat" of how events might unfold.