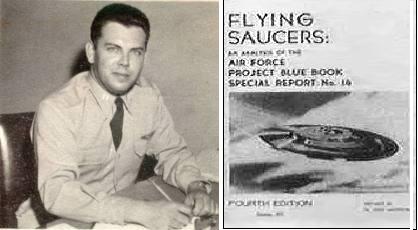 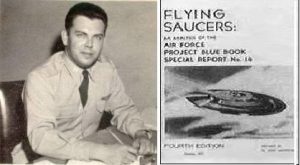 What the heck were all the UFO sightings in the forties and fifties about? The US Air Force made three successive inquiries into sightings during the period.  Project Sign was the first formal inquiry, investigative work began on January 22, 1948. Gen. Nathan Twining initiated the project at Wright Patterson AFB, where all official public UFO investigations were based. The project was known to the public as "Project Saucer", Sign leaned in favor of the Extraterrestrial hypothesis. Wikipedia's Project Blue Book entry reports, "Sign's initial intelligence estimate (the so-called Estimate of the Situation) written in the late summer of 1948, concluded that the flying saucers were real craft, were not made by either the Russians or US, and were likely extraterrestrial in origin. This estimate was forwarded to the Pentagon, but subsequently ordered destroyed by Gen. Hoyt Vandenberg, USAF Chief of Staff, citing a lack of physical proof. Vandenberg subsequently dismantled Project Sign."

Project Grudge succeeded Project Sign in February, 1949. Captain Edward J. Ruppelt (pictured), who was the first head of Project Blue Book, referred to the Grudge Era as "dark ages" of early Air Force UFO investigations. "Everything was being evaluated on the premise that UFOs couldn't exist," according to Wikipedia's Grudge entry.

Project Blue Book, named after blue books used in university finals, succeeded Project Grudge once it was dissolved under pressure from Maj.General Charles P. Cabell. A comprehensive and well-written article at the Museum of Unnatural Mystery, "Project Blue Book: The UFOs Verses the Flying Saucers," describes Cabell's fury when he learned of Grudge's mandate to debunk UFOs, and specifically, when [Project Grudge] investigator Lt. Gerry Cummings told him, "...any UFO sighting examined by the project was taken as a huge joke". Cabell, head of Air Force Intelligence at the Pentagon, thought UFOs deserved serious study and pressured for change, especially, after a number of saucers sighted in September, 1951 in the Monmouth, NJ area.

Ruppelt created the term Unidentified Flying Objects (UFOs) to provide a more scientific label for study. "The results of this study (which were detailed in Project Blue Book Special Report No. 14) [pictured]...Twenty-two percent of all [3200] reports were listed as "unknown." Strangely enough, the better the information that was available about a case, the more likely it was to be placed in the unknown category. This is exactly the opposite of what the skeptics had expected."

In 1952, the Washington DC UFO sightings resulted in the Robertson Panel.  The committee concluded, "the only threat to national security posed by UFOs, the panel concluded, was that the many erroneous reports coming in from the public might overwhelm the Pentagon's communication channels...For this reason the panel recommended that the government start a public relations campaign designed to 'debunk' UFOs and remove the 'aura of mystery' from them to reduce public interest." A disappointed Ruppelt left Project Blue Book in 1953 as a result of the committee's debunking recommendation.

Project Blue Book lingered on and saw only brief periods of serious investigation in subsequent years after Ruppelt's departure. The 1966 Condon Report, headed by physicist Edward U Condon, recommended Blue Book be shut down. The project was terminated in 1969.  UFOs were, according to Project Blue Book's official conclusions, either result of misidentifying a known object, a form of mass hysteria, deranged individuals and hoaxes. A nice recording of Ruppelt's 1956 book, "The Report on Unidentified Flying Objects," is available through Librivox by clicking on title.