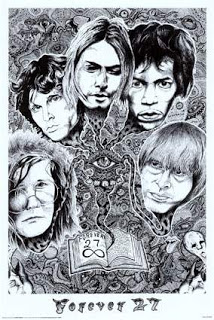 Are procession of young artists to die young, at the age of 27, some kind of sick ritual public sacrifice? This is keen question, Vigilant Citizen (VC) asks in article, "Amy Winehouse and 27 Club," are there cults protected by US government and corporate media with close ties to police behind these rather public deaths? Everyone dismisses them as performers succumbing to pressures to meet a tragic early demise, quickly attributed to drug and alcohol abuse. Is there, also, a shadowy premeditated selection process at work? VC suspects, in article, there is more than meets the eye in early deaths of Amy Winehouse and Heath Ledger, which are similar and fit mold of seminal 27 club members: Jimi Hendrix, Janis Joplin, Jim Morrison and Kurt Cobain.

VC sees similar pattern in other tragic deaths around age 30 such as Brittany Murphy as well as Heath Ledger. "Strangely enough, there often appears to be a media buildup around these figures before their death documenting their odd behavior or personal problems. Were these deaths premeditated and part of some kind of sick ritual carried on by the occult-minded elite at the helms of the industry? Are charismatic stars being risen to fame in order to later sacrifice them, creating a worldwide mega-ritual? Is the wave of shock and grief surrounding these events harnessed in some way by high-powered occultists? These concepts might sound totally ridiculous to the average person but, to occult initiates, the magical potency of a human sacrifices has been recognized and documented by the rituals of many ancient civilizations."

In Amy Winehouse's death, VC observes, "there are already witnesses who described strange happenings shortly before her death. In this news article, Winehouse’s neighbor claimed that there was “screaming, howling and some kind of drum beating” coming from her house the night she died." VC offers another view of the 27 club and those who die young, "was Winehouse under mind control and was she 'thrown from the freedom train'? [Freedom Train is the code word for the Monarch trauma-based mind control. To be thrown from the Freedom Train means to be killed.] Difficult to say".

"Victims of mind control often die at a young age due to several reasons. First, according to trauma-based mind control experts, the torment, torture and control exerted on victims cannot be sustained indefinitely during adulthood. At one point, often around the age of 30, programming wears off, causing the victims to regain some lucidity. This contact with reality often traumatic, causing in the victims to be severely depressed, to show symptoms of mental disorders such as MPD (multiple personality disorders) and the consumption hard drugs and alcohol. When slaves (especially those that are influential) stop responding to programming and begin displaying erratic and unpredictable behaviour, they are often 'thrown from the freedom train'...".

These early deaths are worth closer examination and reader's suspension of disbelief before all the facts are reported. There may be some "howling, screaming and drum beating" involved in a reported "inconclusive death" as in Amy Winehouse's death, commonly believed, the result of drug and alcohol intoxication. Yes, Ms. Winehouse may have died young while singing, "howling and screaming and beating drums" into the early am hours just prior to her collapse, but was it the case? VC finds it doubtful!