from propaganda matrix: Bush administration PR guru and master political strategist Karl Rove has “promised” an October surprise that will help the Republicans to win both congressional houses in November. Will this curveball be another helpful Bush campaign endorsement on behalf of Osama Bin Laden or something far worse?

Newsmax columnist Ronald Kessler cites Republican insiders as the source of the leak that Rove intends on pulling a rabbit out of the hat to guarantee another Republican sweep this November.

“Rove is not saying what the October surprise will be”, writes Kesser, “asked if he would elaborate and give his thinking about the coming elections, Rove told NewsMax that his take largely parallels what RNC Chairman Ken Mehlman said in a Sept. 5 NewsMax story.”

According to a book written by Bill Sammon, Senior White House Correspondent for the Washington Examiner, Bush attributed his 2004 victory over John Kerry in part to a Osama bin Laden videotape released on the eve of the election. 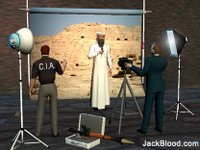 “I thought it was going to help,” Bush decided. “I thought it would help remind people that if bin Laden doesn’t want Bush to be the president, something must be right with Bush.”

Will Rove’s promised pre-election surprise be another Bin Laden “don’t vote for the Republicans” scam or should we prepare for the “inevitable” terror attack that will provide the false flag provocation to kick-start air strikes on Iran?

In August radio host and documentary film maker Alex Jones, who previously warned that Bin Laden would be used as a patsy to attack the World Trade Center, predicted the likelihood of “bone-shattering terror attacks” unless a gargantuan activist effort was launched to put out the alarm that the government is planning a manufactured war provocation.

Is Rove’s October surprise the political assassination, dirty bomb, biological release or terror attack forecast in a 2005 Republican memo, touted to “reverse the sagging fortunes of President George W. Bush,” and “restore his image as a leader of the American people.”

Will the Neo-Fascists again overplay their hand in a desperate lunge to rescue their power monopoly or is Rove’s plan infinitely more sophisticated?