from daily texan: A speech by William Kristol, former chief of staff for former vice president Dan Quayle and editor of The Weekly Standard magazine, turned hostile Tuesday when students began hurling insults at Kristol, alleging his and the U.S. government's complicity in the Sept. 11 attacks.

"9/11 is your Pearl Harbor," said one student protestor, referring to a pre-Sept. 11 statement released by the Project for a New American Century, a conservative think tank Kristol chairs.

the group wrote, "Further, the process of transformation, even if it brings revolutionary change, is likely to be a long one, absent some catastrophic and catalyzing event - like a new Pearl Harbor." 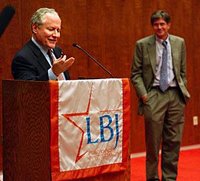 Some of the student protestors are members of the new UT student organization, Project for the New American Citizen, but the group did not officially organize the protest, said founder Matt Dayton. The nonpartisan, anti-imperialism group encourages people to seek out truthful information regarding the U.S. government's policies and actions, said Dayton, an art studio and radio-television-film junior. The group's name is a counter to Kristol's neoconservative think tank...

"They openly needed a new Pearl Harbor in order to enact their new foreign policy," Dayton said. "It's either use it or lose it with your freedom of speech," he said...

Radio-television-film graduate Aaron Dykes, who works for radio host Alex Jones, was escorted from the building by police after repeatedly interrupting Kristol.