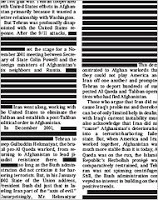 from raw story: A former top Bush administration official for Persian Gulf affairs has said in an interview this morning on CNN that the US may be trying to spark a conflict with Iran.

Hillary Mann is the former National Security Council Director for Iranian and Persian Gulf Affairs. She warned in the interview that the recent flare up between Iran and the US over the former’s alleged assistance to Shi’a militias results from a US desire to provoke conflict with the Iranians.

She added that the administration hopes to goad Iran into an overreaction so that it can have justification to carry out “limited strikes” against nuclear infrastructure and Revolutionary Guards headquarters buildings in Iran.

Last December, Mann was the co-author with Flynt Leverett, formerly the senior director for Middle East affairs on the National Security Council, of an op-ed that identified failings in the Bush administration’s Iran policy. The Bush administration redacted large portions of the editorial, which the New York Times then published in partially blacked out form. RAW STORY published an attempt at a decoding of the contents of Mann and Leverett’s op-ed.