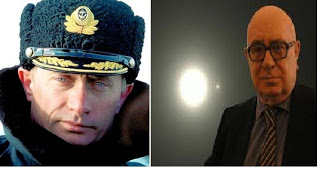 Putin & the Eurasian Empire of the End Times

Everyone has a gut instinct, possibly, "a visionary" possesses a faculty more defined and developed? Jean Parvulesco, a French writer, strikes a  resonant chord with his view Russian leader, Vladimir Putin is a principal figure to play crucial role in our changing world. Philip Coppens writes in article, "Vladimir Vladimirovich Putin & the Eurasian Empire of the End Times," on Putin's role of "change agent." The French writer discovered an article written by clandestine groups in Europe, "The Imperial Eurasian PAC," possibly, viewed as equivalent to US document, "Rebuilding America's Defenses," by the Project for a New American Century (PNAC). What does Parvulesco see?

Parvulesco views our world as presently in an interregnum period, "...at the crossroads of “great history,” where a totally new era is about to be born, " according to Coppens. The social democratic organization of world is dead for all intents and purposes. The French writer sees three operational stages to bring about the Eurasian Empire:

"The first stage is the creation of a Paris-Berlin-Moscow axis, that is considered to be the axis along which this major change will occur. This axis will tie together the destiny of three nations (France, Germany and Russia). The second stage is the integration of what was traditionally known as West and East Europe, together with Russia, Siberia, India and Japan. The final stage involves what is termed the destruction of the “global democratic conspiracy,” led by the United States, including a revolutionary liberation of its people, after which America as a whole (North and South) will become one entity. We can only wonder whether the present drive by the US to expand NAFTA and create a North American Union are steps in this direction."

There will be not only a New Europe, but also, a New America. In the end, a change of worlds represents a social process, where Hitler symbolized Nazi Germnay and Lenin the Communist Soviet Union, Putin will be the symbol for the Eurasian Empire. Parvulesco shows incredible acumen and the present writer, believes indeed, the French writer to be a true visionary!