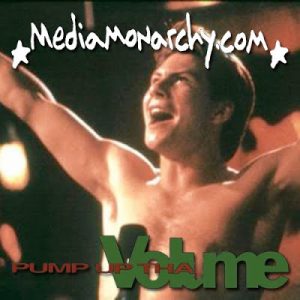 “♫Makin’ a soundtrack for another planet to hear♫” on @PumpUpThaVolume! Episode020 – Warm and Easy was recorded live on RevereRadio.net and features brand new #SongOfTheDay sounds from The 2 Bears, Divine Fits, Alt-J, Dead Can Dance, Niki & The Dove, Mexican Institute of Sound, Macklemore & Ryan Lewis, Aesop Rock, Allah-Las, Homeless, Lavender Diamond and Ivan & Alyosha… because it can’t be news and politics all the time!

****************************************
♬Liner Notes♬ from James: With our man Nick putting his nose to the university grindstone for the next few weeks, the liner notes for these episodes will be done by yours truly and they’ll be a little more cut-and-paste than usual. But, rest assured: there are some BIG changes coming soon – not just for this show – but for the whole Media Monarchy kingdom! But first things first: This week’s episode has supergroups, second appearances, legends and more… So let’s Pump Up Tha Volume!

The 2 Bears
“Warm and Easy”
‘Be Strong’
Southern Fried, 2012
Note: Pitchfork says, “Raf Rundell and Hot Chip’s Joe Goddard, who are both straight, call themselves the 2 Bears in homage of the gay subculture mostly because they fit the bill aesthetically but also as homage to the vanguards of the dance music they love.” The album, ‘Be Strong,’ was released way back in January but is gaining more attention now at the close of summer.
(More Info)

Divine Fits
“Would That Not Be Nice”
‘A Thing Called Divine Fits’
Merge, 2012
Note: “Divine Fits will surely get tagged as a supergroup, though its members — Spoon’s Britt Daniel, Dan Boeckner of Wolf Parade and Handsome Furs, and New Bomb Turks’ Sam Brown, with Alex Fischel helping out on keyboards… This is the work of guys who know exactly what they want from their music: namely, to explore a bit of a new-wave streak while still operating in their wheelhouse of slick, sharp, smart pop-rock,” says NPR. I’ve never seen Spoon live, but I did see Britt Daniel a few years ago at a Low concert at the Doug Fir Lounge in Portland!
(More Info)

Alt-J
“Something Good”
‘An Awesome Wave’
Canvasback, 2012
Note: Another track from Alt-J, first featured on Episode015 – Keep It For Your Own, is another chance to hear the amazingly strange and catchy 21st century pop stylings from this Cambridge, UK band. At the time of writing these liner notes, the band was “Setting off for Belgium to play @pukkelpop festival.“
(More Info)

Dead Can Dance
“Amnesia”
‘Anastasis’
[PIAS], 2012
Note: Generally this show focuses on emerging new artists, but we also get blessed with some legends, too: “Dead Can Dance will release their new album ‘Anastasis’ through [PIAS] Recordings on 13th August. Available on CD, double LP and download, the album is their first since 1996’s ‘Spiritchaser’. The band, who embark on a world tour in August, have confirmed a show at the Royal Albert Hall on 26th October. Tickets for the show sold-out within 48 hours of going onsale.“
(More Info)

Niki & The Dove
“Tomorrow”
‘Instinct’
Sub Pop, 2012
Note: Another band making a return visit this week is Niki & The Dove, who we heard from on our epic Episode016 – Speed Of Sound. “Kaleidoscopic in the studio and a force majeure on stage, it’s no surprise that Malin Dahlstrom (vocals) and Gustaf Karlof (keyboards) of Sweden’s Niki & The Dove’s met while writing music for the theatre.“
(More Info)

Mexican Institute of Sound
“Es-Toy”
‘Politico’
Nacional Records, 2012
Note: Allmusic.com notes that: “Politico is a statement in the same way that the Clash’s Sandinista! or the Sex Pistols’ Never Mind the Bollocks were, but it isn’t nostalgic. Nor is it sonically similar to either.” This is fifth full-length from producer and songwriter Camilo Lara, aka Mexican Institute of Sound.
(More Info)

Macklemore & Ryan Lewis
“Same Love”
‘The Heist’
self-released/Sub Pop, 2012
Note: “Sub Pop will release the track as a limited run 7″ on 7/31, with all proceeds going to benefit the Music for Marriage Equality campaign. The song will also appear on Macklemore & Ryan Lewis’ debut LP The Heist which they’ll independently release on 10/9.” This Seattle-based collaboration also features vocal work by Mary Lambert.
(More Info)

Allah-Las
“Busman’s Holiday”
‘Allah-Las’
Innovative Leisure, 2012
Note: Allah-Las’ Bandcamp page claims: “A sound cultivated from the annals of California culture; the perfect mixture of the sands, the seas, the streets and cities of the golden state.” Meanwhile, KCRW says: “Members of the Allah-Las met while working at Amoeba Music in Hollywood, which could explain all the influences you hear in their music including surf rock, 60’s vibes. Here’s a treat from this LA band’s debut self-titled full length.” Allah-Las even have a split single with another PUTV alum, Nick Waterhouse.
(More Info)

Lavender Diamond
“I Don’t Recall”
‘Incorruptible Heart’
Paracadute, 2012
Note: That aforementioned Low show with Britt Daniel in attendance? Guess who the opener was: Lavender Diamond, aka Becky Stark and company, are about to release ‘Incorruptible Heart’. “The full album will be out on September 25th, and will be the first album on OK Go’s own Paracadute label by an outside artist. Which, besides the fact that the album is already awesome, is awesome. Dave Fridmann, who recorded Of the Blue Colour of the Sky and many other fine albums, recorded the music. M. Ward plays on it…“
(More Info)

Ivan & Alyosha
“On My Way”
‘The Cabin Sessions’ EP
Noise Trade, 2012
Note: Wikipedia says: “Ivan & Alyosha is a folk-pop, indie, rock band from Seattle, Washington. Formed in 2007 with the current members, Tim Wilson and Ryan Carbary. They were later joined by Pete Wilson (Tim’s brother) and Tim Kim. In 2009 the band was recognized nationally by NPR during their coverage of SXSW.” The boys have raised enough money to complete their forthcoming full-length album “All The Times We Had” and recently signed to Dualtone Records – home to another featured PUTV artist, The Lumineers. “On My Way” indeed!
(More Info)

****************************************
@PumpUpThaVolume Music News:
Outside Lands festival stage will be powered by solar panels
Outside Lands in Golden Gate Park has many people entertained, but some neighbors are getting concerned.
Blur’s headlining set last night in London may have been their last-ever gig
I can’t live without my radio: report claims people discover new music via old media
Is @JustinBieber going to collaborate with Korean #KPOP star PSY (@psy_oppa)?
Jack White brings out his girl band (really, he has one waiting) for the “Portland, Oregon” finale, and it’s the high point of a GREAT show.
@SurferBloods John Paul Pitts Arrested for Battery In #Florida:
lame, that’s who we took our motto from… ♫ Makin’ a soundtrack for another planet to hear ♫