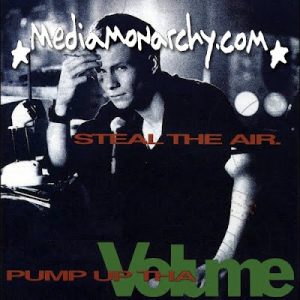 “♫Makin’ a soundtrack for another planet to hear♫” on @PumpUpThaVolume! Episode031 – Tell Me was recorded at the home studios of MediaMonarchy.com and features brand new #SongOfTheDay sounds from Benjamin Gibbard, P.O.S., Jason Lytle, Dark Dark Dark, AC Newman, Willy Moon, El Perro del Mar, Efterklang, Gospel Gossip, Wanda Jackson and BRAINSTORM… because it can’t be news and politics all the time!

Benjamin Gibbard
“Something’s Rattling (Cowpoke) / A Hard One To Know (Live at KEXP)”
‘Former Lives’
Barsuk, 2012
Note: That’s right, it’s a double shot of Gibbstack! Last heard on Episode026, the lead man from Death Cab For Cutie returns to PUTV with more tracks from his first full-length debut. Stereogum says “it really would be difficult to imagine “Something’s Rattling (Cowpoke)” on a Death Cab album — it’s a playful, airy bit of pop mariachi with a melancholy lyric about life in Los Angeles.” The second track is an exclusive live track recorded at #SongOfTheDay source KEXP.
(More Info)

P.O.S.
“Where We Land” (w/ Justin Vernon)
‘We Don’t Even Live Here’
Rhymesayers, 2012
Note: Wikipedia informs us that “Stefon Alexander, better known by his stage name P.O.S, is an underground hip hop artist from Minneapolis, Minnesota. He is a founding member of the indie hip hop collective Doomtree…” Meanwhile, The AV Club writes that “Even the relatively restrained (and gorgeous) “Where We Land,” which features haunting vocals from Bon Iver’s Justin Vernon, feels driven and purposeful to the last second.“
(More Info)

Jason Lytle
“Dept. of Disappearance”
‘Dept. of Disappearance’
ANTI-, 2012
Note: For the second week in a row, the Grandaddy front man graces the PUTV podcast. This week it’s the title track off his second proper solo album and Pitchfork says “Jason Lytle’s second solo album begins much like his first solo album, with a veiled statement about the state of his career… On “Department of Disappearance”, which likewise opens and sets the tone for an album of the same name, Lytle explains, “I’ll crawl into the mountains, I’ll fall into obscurity / A phantom on the landscape, a memory of what used to be.” Is this an ultimatum of some sort?“
(More Info)

Dark Dark Dark
“Tell Me”
‘Who Needs Who’
101 Distribution, 2012
Note: Consequence of Sound says “Dark Dark Dark alternate between melancholy rumination and regret-filled boot-stompers on their second full-length, Who Needs Who… Dark Dark Dark are still struggling to find their own voice, but that struggle can sound just fine. The album moves between regret-filled plaintiveness (“Tell Me”) and the chronicling of a young, hip, and supposedly enviable lifestyle“
(More Info)

AC Newman
“Strings”
‘Shut Down The Streets’
Matador, 2012
Note: Paste Magazine says “Inspired by the death of his mother and the birth of a new son, Newman’s third solo album, Shut Down the Streets, is the most direct, heartfelt item in his catalog, both lyrically and sonically… Newman’s mantra on the bass-driven pulse of “Strings” couldn’t be simpler: “I can do things for you.”” And, of course, you might also know Mr. Newman from ‘supergroup’ The New Pornographers, which also features ‘Shut Down The Streets’ guest Neko Case.
(More Info)

Willy Moon
“Railroad Track” single
Third Man, 2012
Note: Song source KEXP says “Moon’s approach to songwriting is economical – some of his songs barely make it past the two-minute mark – and his aesthetic is minimal and nostalgic. ”Railroad Track,” his first single for Third Man, sounds like it belongs on a film noir soundtrack. Moon’s swaggering confidence and the ominous backing vocals lend the music an air of danger – this is probably one track you don’t want to go down.“
(More Info)

El Perro del Mar
“Hold Off The Dawn”
‘Pale Fire’
Control Group, 2012
Note: National Public Radio says “Ask Swedish singer Sarah Assbring, sole member of the moody pop group El Perro del Mar, and she’ll tell you these are grim times, but not without a flicker of hope. “In this world, you think you have no reason to believe in love or in anything much,” she says. “Then one day, when you least expect it, a light appears on the far horizon. It’s a flickering light, begging you to come, telling you to stay away.” This is the world view behind El Perro del Mar’s latest album, Pale Fire, a weighty collection of experimental pop songs that touches on politics, foreign affairs, and more. The latest single from the record, “Hold Off The Dawn,” is a meditation on the fleeting nature of joy.“
(More Info)

Efterklang
“Hollow Mountain”
‘Piramida’
4AD, 2012
Note: The Guardian says “The boundary-blurring Danes’ fourth album filters the graceful, accessible pop of 2010’s Magic Chairs through a dark veil of mechanised melancholia. “Help, I’m falling,” sings Casper Clausen in opener Hollow Mountain, his tumbling timbre capturing the emptiness of the abandoned Russian settlement where the album was made and from which it takes its title.“
(More Info)

Gospel Gossip
“Atlantic Blue”
‘Atlantic Blue’ EP
Guilt Ridden Pop, 2012
Note: Vivoscene says “The Minneapolis shoegaze thrashers known as Gospel Gossip are back in full psychedelic flight with a 3 song EP called Atlantic Blue that will knock your socks off, if that is, you’re into shoegaze and if you’ve been known to don argyles… “
(More Info)

Wanda Jackson
“What Do You Do When You Are Lonesome”
‘Unfinished Business’
Third Man, 2012
Note: Song source KCRW notes “Hall of Fame inductee Wanda Jackson is at the heart of rock n roll and rockabilly and is going strong at 75 with over 30 albums under her belt. Justin Townes Earle makes his debut as producer on Unfinished Business and pens a song that already feels like a classic for Miss Jackson.
(More Info)

BRAINSTORM
“Flat Earth”
‘Heat Waves’
Tender Loving Empire, 2012
Note: Sweet, we get to go out this week with a Portland band! BRAINSTORM’s label says the band “is an experimental-pop group from Portland, Oregon. With influences ranging from African highlife to soulful AM-radio nostalgia, BRAINSTORM creates a musical experience that is energetic, eclectic, and undeniably engaging.“
(More Info)

****************************************
@PumpUpThaVolume Music News:
Alt-J win the Mercury Prize for their debut album ‘An Awesome Wave’
Beastie Boys’ Ad-Rock is playing a mysterious solo show in a teeny tiny L.A. club
New Thom Yorke music, folks! Hear the punishing Atoms for Peace cut “What the Eyeballs Did”
Watch The Avett Brothers perform “I and Love and You with an orchestra on Jimmy Kimmel Live!
Bruce Springsteen, Jon Bon Jovi, Sting and Billy Joel will play a benefit concert for Hurricane #Sandy victims
Jay-Z and Bruce Springsteen will join Obama on the 2012 presidential election campaign’s final day

One response to “#PumpUpThaVolume: Episode031 – Tell Me ♬”