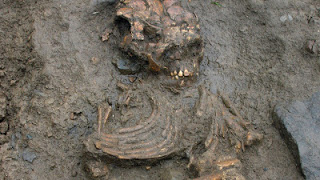 The Archaeology News Network reports on remains first discovered in 1959 in Southwell, England. "The discovery of a skeleton found with metal spikes through its shoulders, heart and ankles, dating from 550-700AD and buried in the ancient minster town of Southwell, Notts, is detailed in a new report. Medieval 'vampire'  It is believed to be a 'deviant burial', where people considered the 'dangerous dead', such as vampires, were interred to prevent them rising from their graves to plague the living. In reality, victims of this treatment were social outcasts who scared others because of their unusual behaviour. Only a handful of such burials have been unearthed in the UK. The discovery is detailed in a new report by Matthew Beresford, of Southwell Archaeology," reports article. A prior post can be accessed here on "deviant burial."   A reader is left to wonder if this represents hysteria or scapegoating, or whether, there's something more to ensuring a corpse does not rise again?