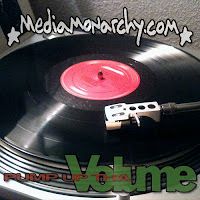 ♫Makin' a soundtrack for another planet to hear♫" on @PumpUpThaVolume! Episode056 - An Invisible Light was recorded at the home studios of MediaMonarchy.com and features brand new #SongOfTheDay sounds from Bleached, Grynch & Budo, Natural Self, Keaton Henson, Elements of Life, AM & Shawn Lee, Lonely Wild, Andrew Wyatt, Wire, Andy Burrows, Dawes, Mikey and Matty, Har Mar Superstar, Josh Rouse and Jetman Jet Team... because it can't be news and politics all the time!

Bleached
"Dead In Your Head"
'Ride Your Heart'
Dead Oceans, 2013
Note: And we begin with duo known as Bleached. Stereogum says, "We’ve already got the energetic “Next Stop” from Bleached’s upcoming album Ride Your Heart... Now, they’ve given us “Dead In Your Head,” another flavor of beach blanket bingo pop that may not be as raucous as the first single, but is just as apt for summer’s haze."
(More Info)

Grynch & Budo
"Treadin'" single
Fin, 2013
Note: Song source KEXP says, "Closing every verse with “I’m trying to get ahead still/I need to hop off of this treadmill” over Budo’s grinding beat, Grynch amply displays that he has the talent and drive to break onto a bigger stage, but as he notes in the song, he’s about one occasion away of being in the right place at the right time for the break he’s looking for. When it comes though, it will only solidify why Seattle has so many marquee names in hip-hop at the moment."
(More Info)

Natural Self
"An Invisible Light"
'Neon Hurts My Eyes'
Tru Thoughts, 2013
Note: "London producer and DJ Natural Self takes on the dual role of singer and songwriter on his latest project, Neon Hurts My Eyes. A favorite among our nighttime DJ's, his third album is full of dynamic beats and bright synths."
(More Info)

Keaton Henson
"You"
'Birthdays'
ANTI-, 2013
Note: NPR says, "The Keaton Henson who appears on the new album Birthdays is an avowed hermit with a profoundly broken heart. He also has one of the most beautiful voices I've heard. The 24 year-old singer from London, who says he rarely leaves his bedroom, bares his wrecked emotional remains..."
(More Info)

Elements of Life
"Canto Para Ochosi"
'Eclipse'
Fania, 2013
Note: AllMusic says, "[Louie] Vega's EOL is the first signing of a new artist by the legendary Fania Records in decades. While Latin rhythms and Nuyorican soul sounds are among those heard here, they are only elements in EOL's attack, which includes African and Brazilian rhythms, jazz, soul, R&B, gospel, and pop. Eclipse is exceptionally consistent over 17 tracks and 78 minutes."
(More Info)

Lonely Wild
"Everything You Need"
'The Sun As It Comes'
Ursa Major, 2013
Note: American Songwriter says, "With their debut album, The Lonely Wild set up camp somewhere between Bruce Springsteen and Ennio Morricone, occupying that rarely-visited place where mariachi horns, four-on-the-floor percussion, vocal harmonies and rafter-reaching rock & roll all intersect." We last heard from The Lonely Wild on Episode054.
(More Info)

Wire
"Love Bends"
'Change Becomes Us'
Pink Flag, 2013
Note: Spin says, "Like nearly everything about this long-running musical project (one hesitates to call it a band), the title of Wire's new album is simultaneously cheeky and flatly informative. Thirty-plus years into an assault on pop conventions, amid multiple sabbaticals and lineup fluctuations, these Class of '77 standouts have perfected a peculiar logic that alternately captivates and infuriates followers..."
(More Info)

Andy Burrows
"Keep On Moving On"
'Company'
Play It Again Sam, 2012
Note: Consequence of Sound says, "Andy Burrows may be better known as the ex-drummer of Razorlight and current seat holder with We Are Scientists, but he represents an altogether more unusual animal, the singer-songwriter drummer. Indeed, Burrows was co-writer on many of Razorlight’s tunes, including the UK #1 “America”, and has fashioned two solo records, a debut in aid of a local charity, and a second under the moniker of I Am Arrows. Company marks the third release for a largely unsung artist who nonetheless produces some effortlessly polished music."
(More Info)

Dawes
"From a Window Seat"
'Stories Don't End'
HUB, 2013
Note: Rolling Stone says, "After spending last summer on the road with Mumford & Sons, Dawes were getting anxious and restless. Constant touring behind their last album Nothing Is Wrong had exacerbated bandleader Taylor Goldsmith's fear of airplanes, but after taking a breath to gain perspective, he channeled his uneasiness into "From A Window Seat," a track rife with skittish drums and shady keyboard jabs."
(More Info)

Har Mar Superstar
"Lady, You Shot Me"
'Bye Bye 17'
Cult, 2013
Note: Again, AllMusic says, "Over the course of his tenure as Har Mar Superstar, Sean Tillmann has always looked backwards to R&B nasty-jam provocateurs like Prince for inspiration, rekindling the fire of the classic sex jam while his contemporaries were reviving garage rock. Bye Bye 17, however, finds the songwriter looking even further back, diving headfirst into classic R&B with an album that's more about soul than sleaze." At first glance, this seems like Har Mar's stab at Cee-Lo's 'Ladykiller'. I like it and bet that he wouldn't sanitize a "Fuck You" for some filthy lucre...
(More Info)

Josh Rouse
"Simple Pleasure"
'The Happiness Waltz'
Yep Roc, 2013
Note: Song source KCRW says, "Josh Rouse now has ten albums under his belt and has established himself as an artist dedicated to showcasing the bright side of all things. His new album, The Happiness Waltz, has a breezy feel that takes us back to the sound of AM radio of the late 70's."
(More Info)

Jetman Jet Team
"Cosmic Age"
'We Will Live the Space Age'
Saint Marie, 2013
Note: And finally, song source KEXP says, "Seattle’s Jetman Jet Team will invariably be compared to shoegaze legends My Bloody Valentine. The warped layers of bending guitars and dream-pop texture of Jetman Jet Team continue the aural exploration of MBV and 1990s sound-weavers Swervedriver and Ride. But rather than imitating their influences, Jetman Jet Team excel by using history to guide them towards crafting their own galactic noise pop. Lush in atmosphere, the 15 tracks on the debut album, We Will Live the Space Age, blissfully hover and soar into the clouds on dense, interstellar guitars and ethereal vocal melodies."
(More Info)