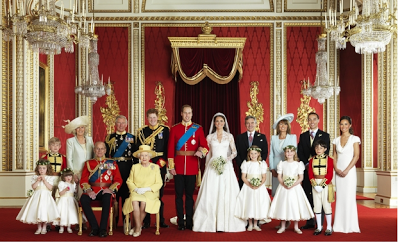 How the Crown Rules the World

Is the Declaration of Independence only a corporate memo?  There are clues to a secretive legal system put in place, over a century ago, actually treats the United States and its citizens as corporate entities with an equity relationship to the Crown.  The Crown isn't the Royal Family [picture, left], by the way, but rather the City of London, according to Mark Owen, who writes about this equity relationship in a fascinating 2009 article, "How the Crown Rules the World."
The present writer finds article best description yet of a legal sleight-of-hand that leaves Americans with only the semblance of citizenship and ownership. Owen explains legal relationship of Royal Crown to the City of London Crown below:

"Although extremely wealthy, the Queen functions largely in a ceremonial capacity and serves to deflect attention away from the other Crown, who issues her marching orders through their control of the English Parliament. This other Crown is comprised of a committee of 12 banks headed by the Bank of England (House of Rothschild). They rule the world from the 677-acre, independent sovereign state know as The City of London, or simply 'The City.'"

"The City is not a part of England, just as Washington, D.C. is not a part of the USA. The City is referred to as the wealthiest square mile on earth and is presided over by a Lord Mayor who is appointed annually. When the Queen wishes to conduct business within the City, she is met by the Lord Mayor at Temple (Templar) Bar where she requests permission to enter this private, sovereign state. She then proceeds into the City walking several paces behind the Mayor."

How does "the Crown" delegate authority? Owen provides explicit details that makes stronger argument that Western world is a financial empire:

"The aforementioned Temple Bar is the juristic arm of the Crown and holds an exclusive monopoly on global legal fraud through their Bar Association franchises. The Temple Bar is comprised of four Inns of Court. They are; the Middle Temple, Inner Temple, Lincoln's Inn and Gray's Inn. The entry point to these closed secret societies is only to be found when one is called to their Bar. The Inner Temple holds the legal system franchise by license that bleeds Canada and Great Britain white, while the Middle Temple has license to steal from America."

"At least five Templar Bar Attorneys under solemn oath to the Crown, signed the American Declaration of Independence. This means that both parties were agents of the Crown. There is no lawful effect when a party signs as both the first and second parties. The Declaration was simply an internal memo circulating among private members of the Crown. Another ruse used to hoodwink natural persons is by enfranchisement. Those cards in your wallet bearing your name spelled in all capital letters means that you have been enfranchised and have the status of a
corporation."

Is this the reason government ignores the will of the People? It could be the case! An amazing article that warrants close attention!