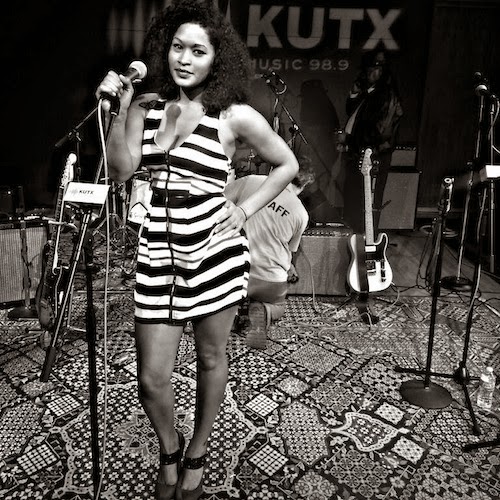 Sleepy Sun
"Galaxy Punk"
'Maui Tears'
Dine Alone, 2014
Note: "Northern California's Sleepy Sun are the rare sort of psych-rock band that gets the importance of mixing actual hooks in with their stompbox experimentation. They've been playing together for almost a decade, and they've developed some serious pop chops along the way, as evidenced on their latest single, "Galaxy Punk," premiering right here. It's got a fascinating kind of shimmering psychedelic aura, but if you strip away all the guitar fuzz and backwards echo, you'd still have a taut, catchy song that a much less trippy power-pop band could have a field day with." This is the band's fourth full-length release.
(More Info)

Growl
"Review" (Live on KUTX)
'No Years' EP
self-released, 2014
Note: "The Austin four-piece plays a brand of power pop that swings hard between those two words: crunching, powerful riffs ripped straight from Weezer’s Blue Album, and penetrating pop hooks that have you singing the chorus after the first time you hear it. The group’s 2013 debut EP was a rough-and-tumble introduction to the band, but earlier this year they returned with No Years. The new EP beefs up the sound and keeps Growl’s live intensity intact, which is built around a serpentine two-guitar attack... Growl recently stopped by KUTX’s Studio 1A to preview the new EP, and today’s song of the day comes from that live session. “Review” ended the set on a dynamic note, starting subtle before exploding into a pleading chorus."
(More Info)

Doug Paisley
"Song My Love Can Sing"
'Strong Feelings'
No Quarter, 2014
Note: The Irish Times says you can "imagine some unsuspecting poor soul wandering into a Doug Paisley gig in a dimly lit backstreet bar in downtown Toronto and wondering if they’d traveled back in time to the 1970s... Paisley has been around a long time, but his three recent solo albums have triggered interest in a singer who, disarmingly, sounds as if contemporary is a foreign country."
(More Info)

Carper Family
"Comes A Time" (Live on KUTX)
'Old-Fashioned Gal'
self-released, 2013
Note: "Austin’s Carper Family is an all female trio of harmony-wielding country at its truest. Though not family in the traditional since, the three women have formed a musical bond through their combination of upright bass, guitar, fiddle, and vocals, and the name is an homage to the Carter Family. Hailing from Texas, Nebraska, and Alaska, each member grew up honing their musical skills playing a veritable array of Americana music before combining forces in 2010. The Carper Family has graced stages both big and small, appearing on “A Prairie Home Companion” as well as the Cactus Café. The trio recently stopped by KUTX’s Studio 1A to preview their upcoming set at Map Jam. They even included a cover of Neil Young’s classic “Comes A Time,” transforming the ’70s hit into a bluegrass-influenced standard."
(More Info)

Nick Waterhouse
"Sleeping Pills"
'Holly'
Innovative Leisure, 2014
Note: Last heard three weeks ago on Episode095, the buzz continues to build! "LA-based musician and producer Nick Waterhouse's latest record Holly will be released March 3 on Innovative Leisure. The new music follows his 2012 debut Time's All Gone ('the soul album of 2012' MOJO) and Waterhouse's production work on friends and label mates Allah-La's self titled record, both of which received widespread acclaim on either side of the Atlantic."
(More Info)

De Lux
"Better At Making Time"
'De Lux EP'
Scion AV, 2013
Note: "More often than not, off chances seem to be behind all of the key events in the story of De Lux, the L.A. modern-disco duo... Popping bass, an undeniable four-on-the-floor beat, and the ever-reliable spiky Rodgers-esque guitar all come together to flank [Sean Guerin and Isaac Franco]’s gang vocals, rising and falling across seven and a half minutes of disco bliss. In the ’80s, “Better At Making Time” would have been a club smash..."
(More Info)

Latasha Lee & The BlackTies
"Watch Me Now" (Live on KUTX)
'Latasha Lee & The BlackTies'
self-released, 2013
Note: After a heartbreaking flame out on TV's "X Factor", the are just getting warmed up. "In 2013, she released her self-titled debut, featuring her band the BlackTies. The album combines the grittiness of Lee’s live performance with a deft throwback touch. Producer Salih Williams – who arguably put Houston rap on the map with his signature sound – lends a subtle hand, coating the album in a modern sheen without stepping on the toes of Lee or her crack backing band... “Watch Me Now” is the sound of a woman standing up after being knocked down, a broken heart (or singing competitions) be damned."
(More Info)

Hospitality
"Going Out"
'Trouble'
Merge, 2014
Note: We heard "I Miss Your Bones" two weeks ago and now here's more from the Brooklyn trio. "It’s been almost exactly five years since we named Hospitality a Band To Watch, and today, as they release their second full-length Trouble, we have a new way for you to watch them. Actually, it’s not them you’ll be watching in Scott Jacobson’s “Going Out” video. Esteemed musical spouses Dean Wareham and Britta Phillips — he of Galaxie 500, both of Luna and Dean And Britta — star in the clip, which finds them dozing off before Wareham embarks on a woozy, slightly glammed-out, highly entertaining sleepwalking adventure. The imagery is a good match for “Going Out,” which pairs Hospitality’s signature spunky indie-pop with a slinky, understated dream-state groove."
(More Info)

Blank Realm
"Back To The Flood"
'Grassed Inn'
Fire, 2014
Note: And now our nearly-weekly entry from the land down under! "After a handful of full LPs printed and released on CD-Rs over the course of five or six years, Grassed Inn is Blank Realm’s second release for Fire Records... “Back To The Flood” is full throttle from the get go. Crunchy guitars saturated with vintage synth bring the track to near clipping levels of noise before...Ramones-meet-Tame Impala vocals come in... Meanwhile, the band pound along with no holds barred on a classic 1-4-6-4 chord progression. The track is always just about to blow your speakers... a summertime pop song for the ages..."
(More Info)

Hard Proof
"Dragon" (Live on KUTX)
'Dragon b​/​w Tere'
Kept, 2013
Note: "Afrobeat originated in Nigeria in the ’70s and gained traction thanks to Fela Kuti, who took his cues from both traditional sources and American funk and soul. Since Kuti’s death in 1997, Afrobeat has spread across the world, even landing in Austin with the local outfit Hard Proof. Much like the musical melting pop that is Austin, the group mixes their Fela Kuti-inspired sounds with elements of jazz, funk, samba, psychedelia, and more, resulting in a musical stew that can move even the shyest of dancers. The 10-piece ensemble started as a Sunday afternoon side project for members of Black Joe Lewis and the Honeybears, the Echoccentrics, and the Calm Blue Sea, but it’s quickly grown into a different beast altogether. The best way to experience Hard Proof is through their high-energy, frenetic live shows, and today’s song of the day is a perfect example of that."
(More Info)

Erik Koskinen
"Six Pack Of Beer and A Pack Of Cigarettes"
'American Theatre'
self-released, 2014
Note: "A native of Michigan’s Upper Peninsula, Koskinen has been a just-under-the-radar-cornerstone of the Twin Cities music scene for going on a decade. He’s an in-demand producer, recording engineer and guitar player... Despite wearing his influences on his sleeve, however, Koskinen is able to pull his own distinct sound out of a very traditional format, and that is where the brilliance of America Theatre lies."
(More Info)

Haden Triplets
"Single Girl"
'Haden Triplets'
Third Man, 2014
Note: Song source KCRW says, "There is nothing like sibling harmony. The Haden Triplets have finally released their self-titled debut album after a lifetime of singing together. Joined and produced by legendary producer and guitarist Ry Cooder, it was worth the wait." But wait, there's more! "From 1991 to 1997, Petra and Rachel Haden were best known as members of the Los Angeles power-pop quartet That Dog. But the two had been singing for years before that, along with their sister Tanya... Here’s the first single, the sisters’ take on the Carter Family’s “Single Girl, Married Girl,” from 1928."
(More Info)

Childbirth
"Will You Be My Mom?"
'It’s A Girl!'
Help Yourself, 2014
Note: Our Pacific Northwest closer this week is Seattle's female trio who definitely have a theme going... "The all-female trio, Childbirth, call themselves a supergroup. Well, it takes a supergroup to get away with the type of silly-serious songwriting displayed on their 2014 record It’s A Girl!... Childbirth – comprised of Julia Shapiro, Bree McKenna and Stacy Peck – also have a knack for quick, punchy riffs and lovable vocal hooks. On “Will You Be My Mom?” there’s a call and response that’s both fun and haunting."
(More Info)

****************************************
@PumpUpThaVolume Music News:
Justin Timberlake, Lady Gaga, and Arcade Fire will play Jimmy Fallon's 'Tonight Show' in its first week
Lady Gaga to shoot creative project at Hearst Castle
Watch @FooFightersDave, @MsLaurynHill, and @ArcticMonkeys cover the Beatles
Why Les Claypool hates Bon Jovi's “Wanted Dead Or Alive”
Damon Albarn announces two new London live shows: The Blur star will play the shows in support of his...
♫ GODLESS ♫ LIVE: the digi-single is out now: http://amzn.to/1iLUQjM . Full LP 3/25 on @TheEnd
Nas is also developing a TV show about the rap scene in the '90s
Spiritualized is dropping a new collection of tracks on Lefse soon
hello pals! check out the new single from the upcoming record I made with @WarehamDean
From a big box of records from my parents in #WestVirginia! ♫ "Rocky Top" by #ConwayTwitty
@AniDiFranco at @AladdinTheater in #Portland on #Feb19
Watch: @CHVRCHES cover @ArcticMonkeys’ “Do I Wanna Know?”
Watch music history unfold infront of you in this frantic + ingenious new video
De La Soul mark Valentine's Day by releasing entire discography as free download
I'm going to @Orbinfo at Star Theater in Portland, OR - Apr 17
Then that ain't a Friday night... At @jacklondonbar w/ @cassiecohn... ♫ "If That Ain't Country" by David Allan Coe
#TomJones to open for #Morrissey at major US shows