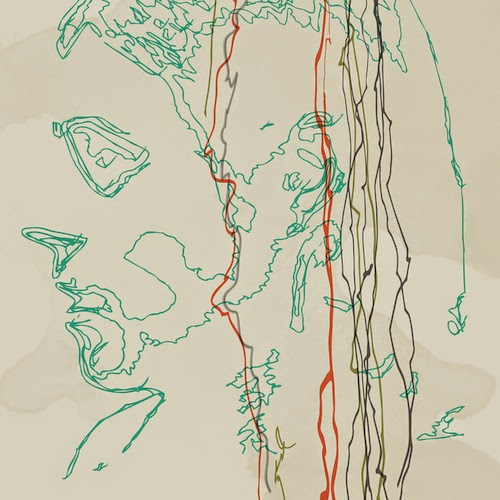 Blonde Redhead
"Dripping"
'Barragán'
Kobalt, 2014
Notes: "The notion of presence seems fitting for a band like Blonde Redhead to explore 21 years into its career. Their place in music history was forged in the early ‘90s as art-punk rockers and secured as dream-pop maestros (and arguably wavered as synthy surveyors). Now on the New York-based trio’s ninth record Barragán, the focus shifts inward. And it turns out that Blonde Redhead has morphed into a sparse, almost trance-like, sonic existence." I just may have to sneak away and see them tomorrow night!
(@BlondeRedhead)

Spider Bags
"Summer Of ’79"
'Frozen Letter'
Merge, 2014
Notes: "Spider Bags formed in Chapel Hill, North Carolina around 2005, but their heart comes from New Jersey... Over the course of four albums, they’ve carved out their own brand of rock-and-roll, mixing punk, psychedelia, and country... It makes sense, then, that they’d work with John Wesley Coleman... On this year’s Frozen Letter, Spider Bags tip their cap to Coleman with a cover of his song “Summer Of ’79.” It’s a fast and loose ode to rock-and-roll, singing its praises like its a religion." All of KUTX's tracks this week feature bands appearing at Fun Fun Fun Fest 2014. (There's also a track called "Chem Trails"?)
(@Spider_Bags)

Streets of Laredo
"Slow Train"
'Volume I & II'
Dine Alone, 2014
Notes: "...fans rabid for new music from the Larry McMurtry-aping Brooklyn [via New Zealand] act can check out “Slow Train,” the record’s first single... Upbeat and full, the track seems like it could be one of those cuts that we’ll hear soundtracking everything from iPhone commercials to happy Grey’s Anatomy moments this fall."
(@StreetsOfLaredo)

Amason
"Duvan"
Fairfax, 2014
Notes: "Swedish indie "supergroup" Amason -- featuring members of Miike Snow, Dungen, Little Majorette and more... have just signed to LA's Fairfax Recordings who will release their debut album, Sky City, early next year. Ahead of that, Amason have just released new single "Duvan" that definitely has shades of Buckingham/Nicks and is a fine showcase for Amanda Bergman's smoky vocals." We heard Amason last December back on the awesome Episode088!
(@AmasonBand)

Kele
"Coasting"
'Trick'
Lilac/Kobalt, 2014
Notes: "Frontman Kele Okereke's new solo album, "Trick," must have been where all those danceable [Bloc Party] ideas went to regroup. The album is a very well-produced survey of smart, contemporary club sounds ranging from down-tempo techno to Burial's bleary after-hours dubstep. But there's a hope and lightness to the mood that sets it apart from Kele's more nihilist electronic-music peers... "Coasting" wrings out Kele's best falsetto yet" This is the second track from the Bloc Party frontman's second solo full-length to be featured on PUTV!
(@KeleOkereke)

My Brightest Diamond
"Pressure"
'This Is My Hand'
Asthmatic Kitty, 2014
Notes: "My Brightest Diamond's Shara Worden can get lost in the minor flood of artists these days who match an individual voice with a classical bent and arthouse inclinations. Worden, who like St Vincent's Annie Clark is a Midwesterner relocated to the urban north-east, will have to settle for admiration from those of us who enjoy their pop cut with something a little more astringent. This Is My Hand starts strong on percussion and brass, and ends with atmosphere overtaking rhythm as the centrepiece. While she's no booming Florence Welch, Worden's voice never settles for ethereal either. The flourishes are like the music around them: fluid but always spikier than you expect." It's the third bow for NYC's MBD on PUTV and the second track from her new record.
(@MyBrightestDmnd)

Chadwick Stokes
"Our Lives Our Time"
'The Horse Comanche'
Thirty Tigers, 2014
Notes: "Chadwick Stokes is known for many things, from his musical past fronting [Boston-based] Dispatch and State Radio to his activism and philanthropy with non-profit Calling All Crows. Most recently, though, Stokes has been at work on a solo record, The Horse Comanche. Produced by Sam Beam (Iron & Wine), Noah Georgeson (Joanna Newsom, Devendra Banhart) and Brian Deck (Josh Ritter, Gomez), the release boasts ten original songs, even enlisting Lucius..."
(@ChadwickStokes)

First Aid Kit
"Emmylou" (Live At ACL 2012)
'The Lion's Roar'
Wichita, 2012
Notes: "One of the best Americana acts these days is a band that grew up nowhere near America. Sisters Johanna and Klara Söderberg started First Aid Kit in their hometown of Stockholm, Sweden in 2007. They discovered American folk and country via Bright Eyes’ 2005 album I’m Wide Awake, It’s Morning, eventually working their way back towards the old guard... both 2012′s The Lion’s Roar and this year’s Stay Gold are big and cinematic. Producer Mike Mogis–who, not coincidentally, is part of Bright Eyes–surrounds the Söderbergs’ harmonies with warm touches of pedal steel and guitar... First Aid Kit knocked us out at the Four Seasons during ACL Fest 2012..." We heard First Aid Kit sing with Bright Eyes (aka Conor Oberst) waay back on Episode006 of PUTV and they're at #FFFfest this weekend.
(@FirstAidKitBand)

Blake Mills
"Gold Coast Sinkin'"
'Heigh Ho'
Verve, 2014
Notes: ""Blake Mills is the last guitarist I heard that I thought was phenomenal," guitar god Eric Clapton gushed in a recent interview. He’s right. Mills is mostly known for his work with other artists; he’s played guitar for Beck, Band of Horses, Julian Casablancas, Norah Jones, Jenny Lewis, Cass McCombs, Jackson Browne, Lucinda Williams, Neil Diamond and others. He’s also produced music for the likes of Conor Oberst, Sky Ferreira and Fiona Apple. But with his second album Heigh Ho... Mills is getting his much-deserved moment in the limelight as a solo artist."
(@BreakMirrors)

Low Roar
"Easy Way Out"
'0'
Tonequake, 2014
Notes: "Not your typical Icelandic band, Low Roar is helmed by Ryan Karazija, who moved from California to the arctic nation after his previous band, Audrye Sessions, broke up. He was quickly embraced by the Reykjavik community, formed his new band with local friends, and produced two albums of atmospheric indie rock. 2014′s 0 follows up the home-produced, self-titled debut with a fuller sound that could only have come from glacial climes of his adopted home. Today’s featured song, “Easy Way Out”, begins with a cool Radiohead-esque vibe that unwinds into its satisfyingly explosive conclusion. Low Roar just completed a tour of America in support of Ásgeir..." This is the one song we're playing from KEXP this week, as they've featured all Icelandic bands this week ahead of the Iceland Airwaves festival!
(@LowRoar)

Charly Bliss
Love Me"
'Soft Serve EP'
self-released, 2014
Notes: "Charly Bliss are a four piece indie rock band from New York City that came out on the other side of playing the CMJ Music conference several weeks ago with some pretty high grades... Editor-In-Chief of Wondering Sound had this to say... : "Charly Bliss are Pixie Stix emptied into a Jolt can — a pulse-racing combination of sugar and adrenaline... They are, simply put, a success story waiting to happen."" OK, I'm convinced! I bought their 7" here!
(@Charly_Bliss)

Tokimonsta
"Drive" (w/ Arama)
'Desiderium'
Young Art, 2014
Notes: "Los Angeles producer and DJ TOKiMONSTA, a.k.a. Jennifer Lee, surprised many when she moved from Brainfeeder to Ultra Records for the release of her album Half Shadows last year. For her next project, the seven-song Desiderium, she makes another label jump, this time to her own imprint, Young Art Records. TOKiMONSTA has already dropped a couple of tracks from her upcoming release... "Drive," whose rhythm patters and slinks around the voice of New York rock and soul singer Arama before dropping down and rummaging around the low end for the lighthearted but determined "I'mma keep it movin'" chorus."
(@TOKiMONSTA)

Perfume Genius
"Queen"
'Too Bright'
Matador, 2014
Notes: "Over the course of two astonishing albums, Perfume Genius, aka Seattle native Mike Hadreas, cemented his place as a singer-songwriter of rare frankness, creating songs that, while achingly emotional, offered empathy and hope, rather than judgment or handwringing. " And he just killed it on Letterman the other night, marking yet another breakout performance on American TV of all places!
(@PerfumeGenius)