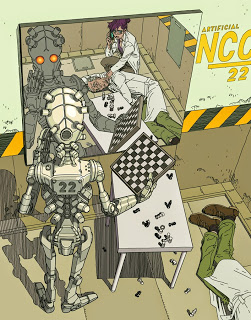 Replanting the Wasteland of the Transhuman Agenda

from ishtarsgate.com: I know it sounds like something out of a really bad L Ron Hubbard science fiction pulp novel, but if you put together all the scientific research coming out recently, what you're left with is what's known as the Transhuman Agenda. The Transhuman Agenda appears to be a global project of eugenicists to genetically modify humans into something that’s more useful to them, just as they did back in the Neolithic period of history, when they created cows from aurochs, and bred us, by social engineering, into the more cow-like submissive creatures we are today.

These scientists seem to be acting in an ethics vacuum. Even in the article, there is no mention about how far we should go in making changes to the human genome, especially when those changes are not in the best interests of the human being. The only use for this technology would be to artificially-breed an army of humans with bullet proof skin. Given that the economies of major Western powers are based on arms dealing, then whose side are these bullet-proof humans going to be on? Not yours or mine, that we can be sure of.

It would be interesting to know who funded that research ~ whether it was the Carnegie Institute or the Rockefeller Foundation who are historically big funders of social engineering projects.


Just as it would be interesting to know why Monsanto now owns nearly 4,000 patents on processes designed to mitigate the effects of geo-engineering (chemtrails) on plants, fruits and vegetables, some of them in partnershp with Mendel biotechnology who specialise in playing around with genes.

It would also be interesting to know how much Monsanto is hand-in-glove with the man-made global warming scam, which is the justification for chemtrails. And I think we should be told whether the polymer nano-fibres dispersed in the chemtrails which contain self-replicating nano-technology are also part of the Transhuman Agenda.

It would certainly explain why Monsanto, as a company, is able to weather even the fiercest of the PR storms in America. Every day, there’s a fresh anti-Monsanto story ~ too many to list here. Any other company would fold under the pressure, but Monsanto doesn’t need to because, as Wikileaks informs us, Monsanto has infiltrated and is now deeply embedded in the US government and the Food and Drug Administration, from which its Stormtroopers can easily and with absolute impunity launch their bullying crusades against the organic farmers and the Amish and just about anybody else that steps out line and saves their seeds instead of destroying them.

If I had read all the above about 10 years ago, I’d think I was reading a science fiction novel, like The War of the Worlds or The Day of the Triffids. Whoever these people are (and I don’t go along with the Reptiles From Outer Space theory) I do wonder how we have allowed ourselves to be corralled, like so much cattle, into allowing them to plan such a nightmare future reality?

It’s the basic right of the human being (unless I’ve somehow slipped through the dimensions to another reality) to grow what he likes on his own patch of soil. When and how was that right lost to our American cousins?

And now that these biotech companies have won the genetically modified foods agenda there, is their next aim to produce genetically-modified human beings, or ‘transhumans’? And if so, how is that going to work? Are we not going to be allowed to produce our own children in the usual natural way? And if we do produce them, are they going to insist that we destroy them and take instead their lab-formed, bullet-proof humanoids? Or will our natural babies be murdered in our wombs? (Please see GMO Foods and the Damage to Human Babies, Placentas & Umbilical Cords)

I know all this may sound ridiculous and way off into the realms of fantasy, but that one couldn’t grow whatever one liked on one’s own patch of ground used to also be a ridiculous idea ~ and in a few short years, it has become a reality.

Even the 2012 Ascensionist psy-ops campaign is part of the Transhuman Agenda. Ascensionists talk of being upgraded into a superior kind of human being with a crystalline body. In fact, they are being mentally prepared to be totally compliant with the view that turning into iRobot will bring them closer to Heaven.

Of course, none of this would have ever been able to take root, cognitively, as a projected, let alone, desirable outcome, if we hadn’t been so brainwashed, for the last 2,000 years at least, that there’s something wrong with just being an ordinary human being who lovingly tends their own patch of soil under a beautiful blue sky.

Now a sort of Dr Strangelove-meets-Dr Josef Mengels Brave New World is being prepared for us by those who mis-spent their youth reading too many Isaac Asimov novels through which they’ve come to believe that technology can solve everything.