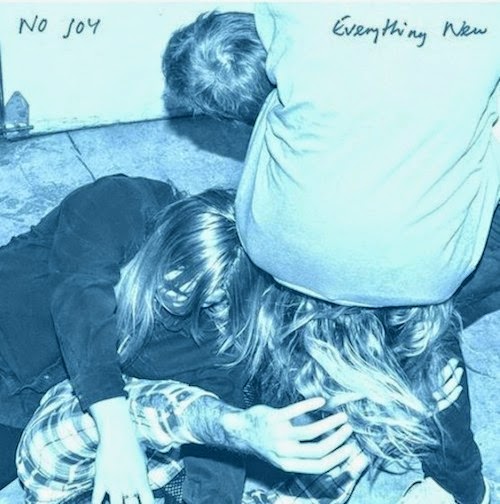 Heartless Bastards
"Gates of Dawn"
'Restless Ones'
Partisan, 2015
Notes: "For Heartless Bastards, rock 'n' roll entails a lot of heavy lifting, most often in the form of hundreds of club shows each year. It's a work ethic reflected on the Ohio-born, Austin-based band's albums... which makes the four-year gap leading up to Heartless Bastards' forthcoming fifth album all the more surprising. But the collection, out June 16, is titled Restless Ones for a reason: The band spent much of that stretch touring and otherwise traveling, and didn't settle down long enough to record new material until late in the summer of 2014."
(@HeartlessBstrds)

Kitty, Daisy and Lewis
"Whenever You See Me"
'The Third'
Sunday Best, 2015
Notes: "Raised on a great record collection by a mom who played in one of punk's greatest all-female bands, the Raincoats... [London's] Kitty, Daisy & Lewis absorbed the early rock 'n' roll sources their sound reflects... The aptly named The Third, which features "Whenever You See Me," gains more gloss from family friend and new producer Mick Jones [of The Clash]... The Durham siblings are growing more skilled with every effort, but as this tart slice of attitude shows, they're not going soft."
(@KDandL)

Jessie Baylin
"Black Blood"
'Dark Place'
Blonde Rat, 2015
Notes: "In celebration of her new album’s release, Jessie Baylin has shared a ’50s-era inspired lyric video for her track “Black Blood.” Baylin’s new album, Dark Place, was produced by Richard Swift and was released today on Blonde Rat Records.“During the making of Little Spark, I first met Richard Swift and with him there was instant trust and chemistry,” Baylin said. “He was the first person who I felt saw me as an artist and he wasn’t expecting anything except for me to be myself. In recording Dark Place we immediately understood the direction this album was going to undertake.”" We also heard "Creepers" from Jessie Baylin back on Episode146.
(@JessieBaylin)

No Joy
"Everything New"
'More Faithful'
Mexican Summer, 2015
Notes: "On June 9th, Montreal shoegaze outfit No Joy will return with new album More Faithful. Due out through Mexican Summer, the follow-up to 2013’s Wait To Pleasure was recorded in Brooklyn and Costa Rica, and features production by Jorge Elbrecht (Ariel Pink’s Haunted Graffiti, Chairlift). A press release describes the 11-track effort as an album that “bears the fruit of a band that has refined its work ethic in the gulf of time between recording sessions,” adding, “The outcome – a juxtaposition of unrest and calm, beauty and chaos, truth and fantasy, in the throes of dimed amps and hair-whipping guitar goddess rock music – is as unwavering as ever.”" Oh baby, I love producer Elbrecht's work as Violens and Lansing-Dreiden!
(@NoJoy)

Surf City
"Spec City"
'Jekyll Island'
Fire, 2015
Notes: "Auckland, New Zealand’s Surf City draws from the more languid and loose traditions of indie rock and Flying Nun’s melodic sensibilities, merging the two in songs that are both dense and immediate. Founded by Josh Kennedy and Davin Stoddard in 2004, the band was originally titled Kill Surf City, named in honor of a Jesus and Mary Chain b-side... Not unlike its title’s similarity to its author’s, “Spec City” condenses the myriad indie rock-based strengths of Surf City and packages them as directly as the band ever has."
(@SurfTheCityBand)

Waxahatchee
"Air"
'Ivy Tripp'
Merge, 2015
Notes: "Once a hushed solo project born out of the dissolution of P.S. Eliot — a pop-punk band with her twin sister Allison — Waxahatchee has quickly become a band, punctuating her minimal songs with gnarled guitars and punk drumming. In the process, Crutchfield has grown into a confident, emotionally open lyricist who's fully capable of ripping your heart out. After two superb albums in only a couple years, Waxahatchee is already returning with the just-announced Ivy Tripp, out April 7. And it's clear from the first single, "Air," that the new album continues Crutchfield's evolution." Waxahatchee gave us our "Coast To Coast" title track two years back on Episode053. Plus, she and Jessie Baylin are our only previously played bands on PUTV this week, other than that it's "Everything New"!
(@K_Crutchfield)

Blind Shake
"Holy Road"
'Fly Right'
Slovenly, 2015
Notes: "Approaching their garage rock sound head on with a hardcore mentality, [Twin Cities'] The Blind Shake have been in the business of creating volatile anthems for over a decade. Described as “spaghetti-western tinged surf punk” with a “bold garage wail,” the trio’s latest offering sounds like it should be a cataclysmic car crash of influences. What comes out of all that, however, is a tasteful blend aesthetics that craft out something delightfully new... ‘Holy Road’ mirrors the preceding track’s twanging refrains, fuzzed out vocals dragging the track out of the desert and into distortion."
(@TheBlindShake)

PPL MVR
"People Mover"
Elektra, 2015
Notes: "...they call themselves "the one and only PPL MVR," and claim to be some sort of ancient species (mostly seen around the Los Angeles area).We also know this species has an affinity for heavy duty rock and roll, windmill guitar riffs and karate kicks, as captured on this video for the song, "People Mover."" You gotta love a band that acts like aliens!
(@PPPLMVR)

Joe Pug
"Bright Beginnings"
'Windfall'
Lightning Rod, 2015
Notes: "...four consecutive years on the road left the Austin native exhausted and contemplating retirement. With sessions for his third album looming, Pug made the decision to take a sabbatical, heading home to recuperate and rediscover his love of live music. Finally recharged, he booked studio time in mid-2014 to begin work on the follow-up to 2012’s The Great Despiser. Due out March 10th via Lightning Rod Records, the resulting Windfall LP sees Pug face his hardships head-on..."
(@JoePug)

Fritz Kalkbrenner
"Pitch Perfect"
'Ways Over Water'
Suol, 2014
Notes: "German producer Fritz Kalkbrenner comes from a club music tradition, but on his third album, Ways over Water, he demonstrates that his talents cannot be limited by genre."
(@FKalkbrenner)

MALKY
"Diamonds"
'Soon'
Eighty Days, 2014
Notes: "Enjoy a new track “Diamonds” from German-based duo MALKY. The song saunters into your ears slowly, sexily, before we realize it’s a song of sadness: “Don’t you know how much it hurts me?” asks singer and pianist Daniel Stoyanov, who together with producer Michael Vajna makes MALKY. Their name means “little boy” in Bulgaria, where Daniel emigrated from to Germany as a child. Apparently the two are inseparable “brothers in spirit” and share a nostalgic yearning that’s woven in the thread of their music. The 60’s-era blues on the track is bejeweled with modern beats to create a well-rounded songthat allows the boys to strut their stuff. Add them to your playlist that flows from Otis Redding into Twin Shadow." Hard to find much info on this German artist, but they've just dropped a US EP for "Diamonds".
(@MalkyOfficial)

St. Kilda
"September"
'St. Kilda'
self-released, 2015
Notes: "If the voice behind Seattle’s St. Kilda sounds familiar, you might be recognizing local singer/songwriter Joshua Morrison who first won us over in 2008 with his Nick-Drake-esque ballad “Home.” Since then, he’s turned his attention to film soundtracks, and together with long-time collaborator Jeramy Koepping (Voyager One, Grand Hallway), they composed the score to the 2011 film The Off Hours. Another local luminary, Matthew Brown of Trespassers William and The Soft Hills, joined them for the soundtrack to the 2012 film Eden. By 2013, the now-solidified trio decided to bring their compositions from the screen to the streets by adding their atmospheric sound to Josh’s folk songs."
(#StKildaBand)