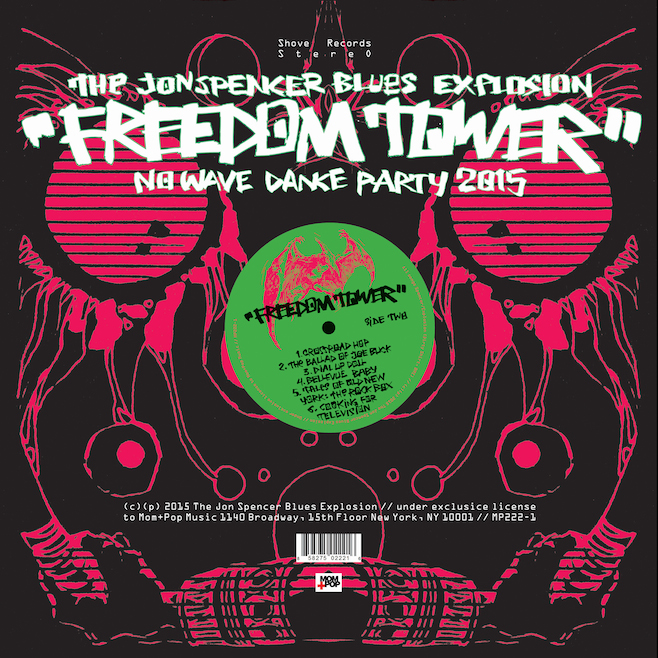 @PumpUpThaVolume: Episode162 – Do The Get Down

♫Makin' a soundtrack for another planet to hear♫ on Episode162 - Do The Get Down which features brand new sounds from Jon Spencer Blues Explosion, Yukon Blonde, Mac McCaughan, TORRES, Phases, I Am The Albatross, EZTV, Flume, Lady Lamb, Taj Raj, The Very Best, Miss E, Girl In A Coma and Unknown Mortal Orchestra...

Previous: Episode161 - Check This Shit Out

Jon Spencer Blues Explosion
"Do The Get Down"
'Freedom Tower: No Wave Dance Party 2015'
Mom + Pop, 2015
Notes: "It’s amazing how quickly the great ’90s garage honkers in the Jon Spencer Blues Explosion went from a festival-reunion attraction to becoming, once again, a working band... The follow-up to 2012’s Meat And Bone has the great title Freedom Tower – No Wave Dance Party 2015, and the band is calling it “a document of New York City, a chronicle of grit and terror and love.”... first single “Do The Get Down” finds the band flirting with the same funk and hip-hop sounds they played around with on 1994’s Orange..." We played "Get Your Pants Off" from JSBX's last album back on Episode037 in December 2012!
(@JSBX_1)

Yukon Blonde
"Como"
'On Blonde'
Dine Alone, 2015
Notes: "Vancouver’s Yukon Blonde have built their career on fuzzy guitars and massive power-pop hooks, which most recently anchored their 2012 LP Tiger Talk. On their [third] full-length, On Blonde, the band have added some new colors to the mix, augmenting their jangly sound with a sizable arsenal of analog synths... There’s plenty here that would feel at home on a 1980s John Hughes soundtrack—and even dashes of Purple Rain-era Prince." Yukon Blonde was the very first band we played on our pilot episode back in March 2012!
(@YukonBlonde)

Mac McCaughan
"Lost Again"
'Non-Believers'
Merge, 2015
Notes: "Mac McCaughan has been making heartfelt and catchy-as-hell music — both with his long-running band Superchunk and his more-or-less-solo side project Portastatic — for decades. But he’s waited until now to release an album under his own name... “Lost Again,”...is a warm and bittersweet and gorgeous tune about feeling untethered... Like so many of McCaughan’s songs, it feels instantly familiar, like something you’ve been happy to have in your life for years." Um, it's also worth noting that he founded and runs one the most successful and respected indie labels around.
(@MacMerge)

TORRES
"Sprinter"
'Sprinter'
Partisan, 2015
Notes: "[Brooklyn] Singer-songwriter Mackenzie Scott (a.k.a. Torres) detangles years of spiritual unrest on her stirring second album. She recorded the set in an old children's nursery in rural England with co-producer Rob Ellis (PJ Harvey) and Portishead guitarist Adrian Utley, who help give her steely reflections a ghostly vibe... On the title track, she looks back at her own religious upbringing, illuminating the long-running face-off between the skeptic and the Holy Spirit that both preside in her.
(@TorresLovesYou)

Phases
"I'm in Love with My Life"
Warner Bros., 2015
Notes: "The main message from the L.A.-based quartet here is the importance of having a good time. You could sum it up with a lyric from its chorus: “Feeling good ain’t going out of style.”" These guys bounced around for a bit before signing to WB and they blew up in the last week as a bunch of radio stations added this infectious track to their playlists.
(@PHASESmusic)

I Am The Albatross
"Port City"
'Lonesome Son'
Rail Rider, 2015
Notes: "‘Port City’ is an ode to the part of I-10 which runs between Texas and Louisiana... [The Austin trio's] debut album... is a natural, but substantial progression from the its early-2014 EP, which Ovrld called “Haunting and alien, full of menace and fire.” “It’s a rock record for sure,” Berkowitz says matter-of-factly of the new group of tunes that mightily show off the influence of Neil Young & Crazy Horse, Kyuss, Tom Waits, Nick Cave, and Clutch."
(@IAmTheAlbatross)

EZTV
"Trampoline"
'Calling Out'
Captured Tracks, 2015
Notes: "[Brooklyn's] EZTV's glitchy guitar-pop slides up the frets straight into your frontal lobe. Just try and get the melody for "Trampoline" out of your head. Once the newest Captured Tracks outfit electrocutes their sleepy riffs with the stomp of a chorus pedal, it's like laying in a hammock on moon."
(@AINTEZTV)

Flume
"Some Minds" (w/ Andrew Wyatt)
Mom + Pop, 2015
Notes: "Aussie EDM phenom Flume has shared a new track "Some Minds," which features vocals and lyrics from Miike Snow’s Andrew Wyatt. On "Some Minds," Flume delivers a subdued soundscape of synth and beats, and he rewards the listener with some electronic wizardry in the final minute. Flume (real name Harley Streten) has described the recording sessions for "Some Minds" as “one of the most natural I've done.”" We first heard Flume do a track with another guest - Chet Faker - back on Episode093.
(@FlumeMusic)

Lady Lamb
"Billions of Eyes"
'After'
Mom + Pop, 2015
Notes: "After, the sophomore album by [Maine's] Aly Spaltro, known professionally as Lady Lamb, is an exuberant, surreal journey by a songwriter who acknowledges no constraints—not by song structure, and certainly not by genre." It's Lady Lamb's third time on PUTV.
(@LadyLambJams)

The Very Best
"Mwana Wanga"
'Makes A King'
Moshi Moshi/PIAS, 2015
Notes: "The third studio long player from the Swedish-Malawian duo, Makes a King finds The Very Best doing what they do the very best; offering up an alluring amalgamation of politically charged afro pop and slick European house music." We heard The Very Best way back on Episode022.
(@RealTheVeryBest)

Miss E
"Hummingbird"
Tilted, 2015
Notes: "As we've counted down the days to new episodes of Orange Is the New Black, we're excited to premiere a song by Miss E. The daughter of the show's creator, Jenji Kohan, she wrote the song just last year at the age of 12 and is featured in the first episode."
(#MissE)

Girl In A Coma
"Adjust" (Live On KUTX)
'Exits & All the Rest'
Blackheart, 2011
Notes: "Last year, Girl In A Coma took a year off. It was well-deserved rest for the San Antonio trio, who have been going pedal-to-the-metal since forming a decade ago. Their three albums–plus their stellar 2010 covers record–earned them critical acclaim, world tours, and a fan in Joan Jett, who signed the band to her Blackheart Records early in their career... they’re back on the road... Their signature sound – blurring the line between light and dark, joyful and morose – is on full display in “Adjust,” which the band played for us recently in Studio 1A..."
(@GirlInAComa)

Unknown Mortal Orchestra
"Can't Keep Checking My Phone"
'Multi-Love'
Jagjaguwar, 2015
Notes: "Funk has sashayed its way back into the forefront of music, and almost no one is incorporating it better than Unknown Mortal Orchestra. Maybe it’s Ruban Nielson’s expansive, plush, porous voice — that I previously praised for its impact on “Multi-Love” — but the enormous grooves on new track “Can’t Keep Checking My Phone” seem to expand and billow with their own self-satisfaction. Toss those bulging grooves next to the jingling coin-in-pocket freneticism and a song about the perils of technology-warped love is ready for its own roller rink dance routine." We ended Episode153 with the title track to UMO's latest - and this makes their 5th time overall on PUTV.
(@UMO)

****************************************
♬@PumpUpThaVolume Music News♬:
#AlbumOfTheWeek: @NoJoy - 'More Faithful' ~ @JorgeElbrecht-produced 3rd LP from Montreal shoegazers
Sweet, that new @Franz_Ferdinand + @SparksOfficial collab - @FFS_MUSIC - is out! #CollaborationsDontWork
@foofighters have been forced to cancel a pair of tour dates after Dave Grohl broke his leg
@vanmorrison has officially been knighted by the Queen
@TheWarOnDrugs sign two-album deal with Atlantic Records
Unsung Legends: Ash Are Ready to Go ‘Kablammo!’ Again
Fugazi's divisive classic Red Medicine turns 20 tomorrow; take a look back with us
The Tennessean catching up on all things #Bonnaroo2015
.@kendricklamar and @chancetherapper joined @EarthWindFire onstage at Bonnaroo
Tonight @Bonnaroo ima b running around checking out @SBTRKT @donaldglover @Slayer @ISO50 & @flumemusic - i'm playing smack in the middle 1am
So great to see @mxpx again after almost twenty years, with the old punks and news ones at @CrystalPortland...