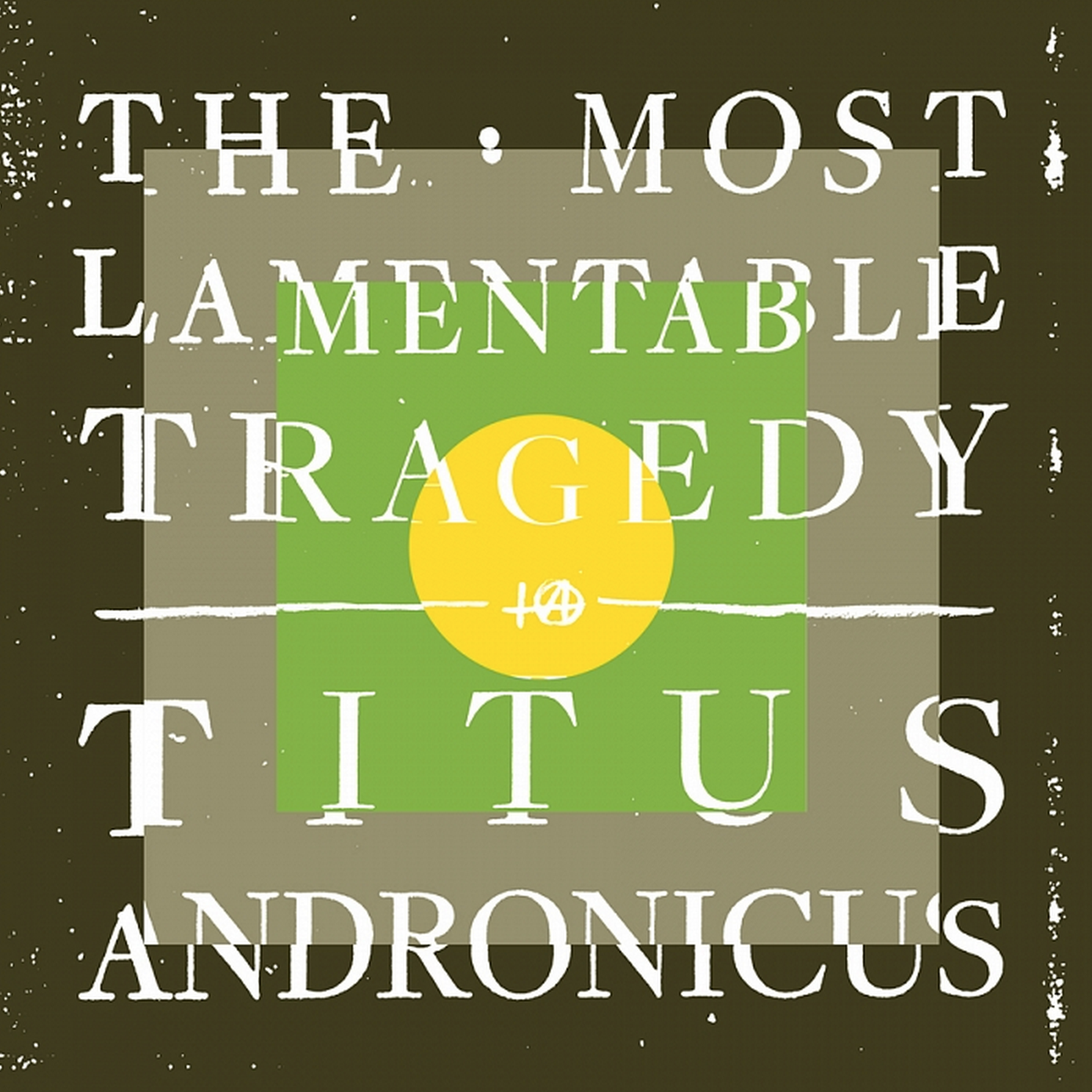 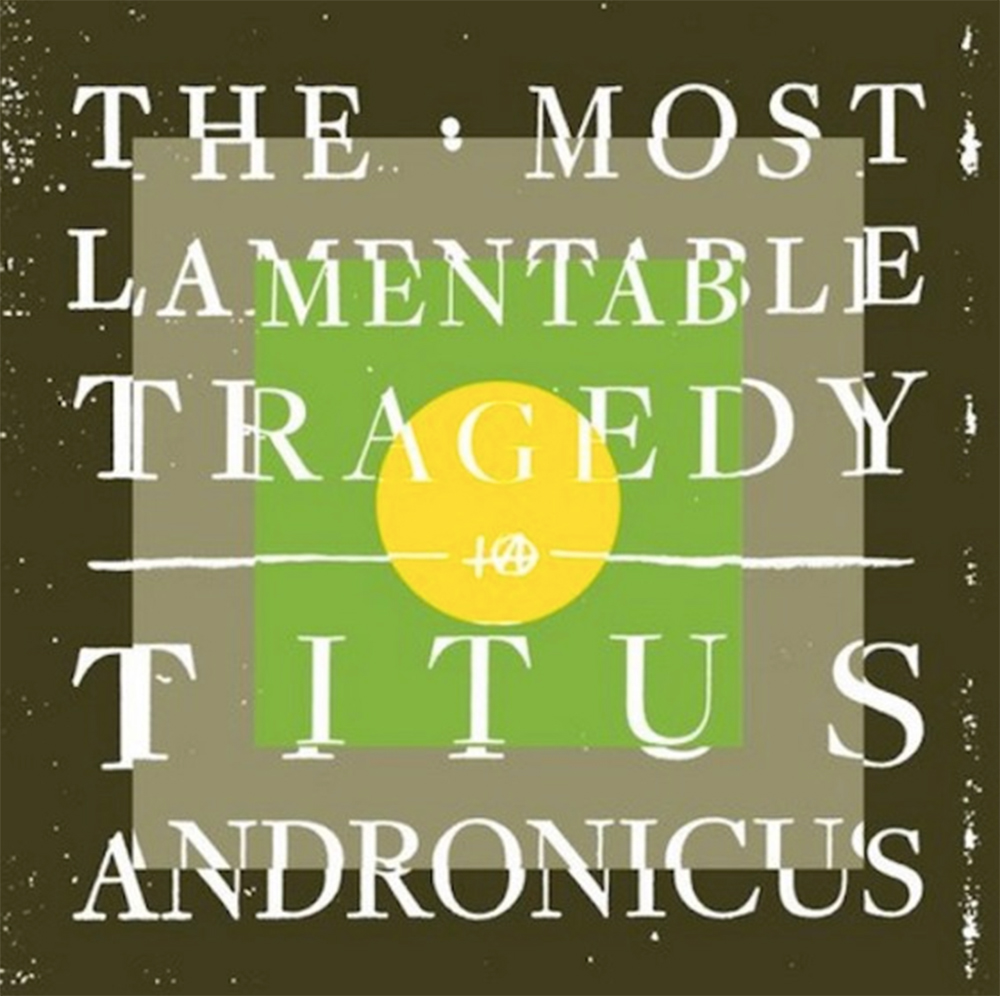 Titus Andronicus
"Fired Up"
'The Most Lamentable Tragedy'
Merge, 2015
Notes: "Named for Shakespeare’s first (and perhaps bloodiest) tragedy, the ambition of the New Jersey rock band Titus Andronicus is unquestionable... [The band formed in '05 and had put out three LP's]. After taking some time off and playing sporadic shows in the Northeast, the band’s ambition returned this year in the form of this year’s 93-minute, 29-song, five-act rock opera The Most Lamentable Tragedy. Within the sprawling triple-album, there are many rousing, explosive rock songs about pushing beyond one’s own struggles, and “Fired Up” might be the one that best encapsulates the album’s dense, multi-faceted themes."
(@TitusAndronicus)

Koo Koo Kanga Roo
"Fanny Pack"
'Whoopty Whoop'
Asian Man, 2014
Notes: "Koo Koo Kanga Roo will make a fan out of you. It might be a hard sell at first if you’re hung up on asking yourself why two grown men would be playing children’s songs for adults. But sooner or later, your skepticism will wash away as you’re won over by the overwhelming positive vibes that come from singing and dancing along to songs about dinosaurs, cat parties, and peanut butter and jelly sandwiches. On their [last] album, Whoopty Whoop, the loveable [MPLS] Minnesota duo are back with ten more reasons to stop questioning and start dancing. With songs about pizza, fanny packs, and cake, they prove that they are the undisputed kings of having a good time."
(@KooKooKangaRoo)

Will Johnson
"Call, Call, Call"
'Swan City Vampires'
Undertow, 2015
Notes: "Steadiness has long been a key ingredient for Will Johnson, but 2014 was a shaky year for the Austinite: he lost his mother and his longtime band Centro-Matic. His new solo venture, Swan City Vampires (out September 25), reflects these twin emotional shakeups. It’s a messy record, careening between noisy roots-rock squalls, synthesized textures, and elegiac acoustic odes to both his mother and all he’s built across a two decade career."
(@WillJohnsonTX)

Kevin Morby
"Moonshiner"
'Moonshiner b/w Bridge To Gaia'
Dead Oceans, 2015
Notes: "Kevin Morby has always been a bit of a tramp. Born in Lubbock, raised in Kansas City, resided in Brooklyn and now currently based in Los Angeles, the singer-songwriter sojourned with lo-fi psych pop band Woods before co-creating The Babies with Cassie Ramone, and then striking out on his own. And his stride has been quick – between Woods and The Babies, he took part in six albums in four years, and then his two stellar solo releases, Harlem River and Still Life, appeared in consecutive years. At this pace, he should be due for his third right about now, but instead, he’s slowed down just a bit to announce his new home at Dead Oceans (nearly everything he’s recorded thus far has been on the estimable Woodsist label) and a new LP due in 2016."
(@KevinMorby)

Pacha Massive
"Where We Come From"
'Where We Come From'
Nacional, 2015
Notes: "Pacha Massive is New York City in a nutshell—where every street corner is a meeting of cultures, stories, and sounds... Along with their fluid interweaving of the English and Spanish languages, Pacha Massive has been praised for their unique fusion of electronic beats with traditional Caribbean rhythms (influenced by [lead/founder] Nova’s upbringing in the Domincan Republic)."
(@PachaMassive)

Diamond Center
"Bones"
'Crystals for the Brass Empire'
self-released, 2015
Notes: "The Diamond Center formed in Athens, GA, solidified in Richmond, VA, and now calls Austin home. On its new album, Crystals For The Brass Empire, the Diamond Center explores a more southern-fried variety of psychedelia. The music creeps like kudzu, gothic like the Black Angels and entangling like the 13th Floor Elevators. On “Bones,” the band matches clanging percussion with a dark melody – it’s noir you can dance to."
(@DiamondCenter)

Coals
"Weightless"
self-released, 2015
Notes: "Some songs utterly destroy whatever barriers you’ve put up against the world, and “Weightless” by Polish band Coals is one of them. This young duo, who might easily draw comparisons to The xx and classic 4AD spangle makers, is one of the great discoveries [KEXP] found when [they were] invited to attend the OFF Festival in Katowice, Poland, last month."
(#CoalsMusic)

Haley Bonar
"Woke Up In My Future"
'Last War'
Graveface, 2014
Notes: "[When Low's Alan Sparhawk] caught a performance by a then-unknown Haley Bonar [based in St. Paul], Sparhawk insisted that she come out on tour with him [and his fellow Minnesotan band, Low]. Since then, Bonar has released a string of albums, developing into a quite special artist... Minimalist in the best possible way, the directness of her approach recalls those early PJ Harvey albums - but shot through with an American viewpoint, of course." This is Haley Bonar's third appearance and third cut from last year's 'Last War'.
(@HaleyBonar)

Plastic Pinks
"Livin' On The Coast"
'Livin' On The Coast' EP
Weiner, 2015
Notes: "Florida 5-piece Plastic Pinks capture the sun and surf of Miami through a garage-punk lens. It’s music that suits the beach just as well as a rowdy dive bar, and in the band’s own words is “pop without actually sounding like pop.” Think Iggy and The Stooges meets The Beach Boys, and you won’t be to far off from Plastic Pinks. That said, a beach themed song like “Livin’ On The Coast” is a very fitting introduction to the band."
(@PlasticPinks)

Eliot Sumner
"After Dark"
'Early Reflections'
Island, 2015
Notes: "[Sting's daughter is prepping her debut full-length. She said:] "'After Dark is a song about reaching the point of no return in an evening," she says. "I am an extremist, so it’s very difficult for me to do things in moderation. The song isn’t about any event in particular, I just know myself after I have one drink and the lyrics to ‘After Dark’ is often how it pans out.”"
(@EliotSumner)

Sonny Knight and the Lakers
"Sonny's Boogaloo"
'Do It Live'
Secret Stash, 2015
Notes: "At the age of 66, veteran performer Sonny Knight brings to mind other soul singers like Charles Bradley and Lee Fields who’ve found new audiences decades after getting into music... the band is ready to release their first ever concert album... Recorded in their hometown of Minneapolis at the Dakota Jazz Club over two nights and four performances, the result is a double LP that captures one of the hottest live acts around doing what they do best." It's Sonny Knight's third time on PUTV.
(@BoogalooSonny)

Fantastic Negrito
"Lost in a Crowd"
'Fantastic Negrito Deluxe EP'
Blackball Universe, 2015
Notes: "Xavier Dphrepaulezz sings like a man compelled by a spiritual force... making bluesy music again as Fantastic Negrito. Last year, he released his self-titled debut EP under the moniker; on July 24th, it’s being reissued as a deluxe edition with a handful of bonus material via Blackball Universe. One of the additional tracks, “Lost in a Crowd”, may sound familiar to fans. Earlier this year, the song was dubbed the first-ever NPR Tiny Desk Concert contest winner."
(@MusicNegrito)

Scooter Island
"Breezy" (w/ Zoe Penina)
'Scooter Island'
Amuse-Bouche, 2015
Notes: "Meet Matt FX Feldman, the 23-year-old wunderkind behind some of your favorite television shows’ soundtracks. He was just 19 when he was hired as a music consultant for the teen soap Skins and now he works as the music supervisor for Comedy Central’s hit Broad City, where he ensures the tunes are as cool as Abbi and Ilana... When he’s not supervising, he’s in charge of the musical collective Scooter Island. The group weaves together elements of modern electronic production with classical songwriting and resonating vocal performances creating what Matt calls “rooftop music.”"
(@ScooterIsland)

Silver Torches
"Woman In Rust"
'Heatherfield'
self-released, 2015
Notes: "Erik Walters, the former frontman of The Globes, makes wonderfully hushed music under the pseudonym Silver Torches... And with the more stripped back sound of Silver Torches, the Seattle artist’s songwriting is given an even bigger spotlight... ["Woman In Rust" from his upcoming sophomore record] features acoustic guitar layered with the restrained, soft tones of its electric counterpart. The drizzle of a rainy day can be felt in Walters’ voice, which gently crescendos into a subtle harmony as the song comes to an end."
(@SilverTorches)