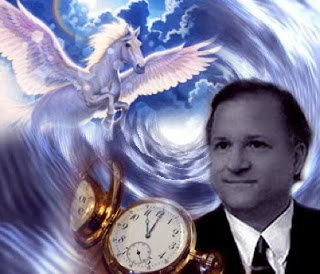 DARPA conducted top secret time travel experiments under banner Project Pegasus, according to Andrew Basiago, who reveals his involvement as a child in the late sixties and early seventies. Alfred Lambremont Webre reports in an Examiner article, "Secret DARPA time travel program may hold key to understanding the deep politics of 9/11," Basiago attests former Secretary of Defense Donald Rumsfeld, in the early seventies as attache to the project, learned of 9/11 thirty years prior to the event. Basiago reveals images of 9/11 were stored "...using chronovision to capture remotely and record on film a vast amount of footage of past and future events". Basiago also claims in a related April 19, 2010 radio interview, Rumsfeld changed the location of his office in the Pentagon a short time prior to 9/11!

Webre, has written, other articles in series on time travel available for reading here. You can get more information on time travel here. The present writer remains open, wondering if Webre is primarily a disinfo agent to muddy the waters? Or, is there a growing secret world or breakaway civilization, leaving us in the dust? It's an interesting read either way!