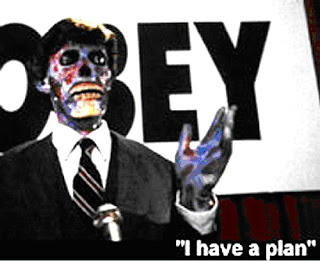 rallies have always been used to manipulate the masses

from kenny's sideshow: I finally saw the 1988 movie "They Live" today and realized what Peter Chamberlin is saying with his blog title 'There Are No Sunglasses'. I also saw a little of the Stewart and Colbert sanity/fear rally and you don't need the sunglasses to see through it.

The lefty counterpoint to the righty Glenn Beck hijacked Tea Party types. The lefties may be a little more fun but no less propagandizing. It's breaking us down into two groups that oppose each other as if that's all there is.

But most of us don't actually fit into this false duplicity. We're the ones who don't like Stewart and Obama, Beck and Palin. Using conventional terms we as individuals are a mix of conservative, liberal, moderate, radical or what ever you want to call it. Sort of 'mongrels' that don't fit what the media wants us to be.

A real rally for America would be anti-war, anti-imperialism and most definitely anti-criminal government and anti-wall street/banker syndicate. Basically it would be looking for the truth wherever it leads us. We haven't seen much of that in these controlled for TV gatherings.