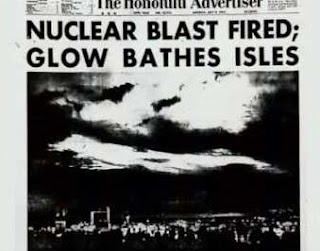 Starfish Prime was a series of high altitude nuclear tests in the Pacific Ocean, conducted by military from Johnston Island. On July 9, 1962, a hydrogen bomb lifted 250 miles into space atop a Thor rocket detonated, causing an unprecedented auroral light display. In Honolulu, several hundred miles away, "when the bomb burst, people told of blackouts and strange electrical malfunctions, like garage doors opening and closing on their own ... But the big show was in the sky." James R Fleming, while researching biographical material on James Van Allen, believes the tests began literally the same day Van Allen announced his historic discovery of the radiation belts to the National Academy of Sciences (NAS) in 1958. Fleming discovered documents at the University of Iowa, dated the day of the press conference at NAS, where Van Allen agreed to participate in a military project to set off atomic bombs in the magnetosphere to see if they could disrupt it! Fleming comments in the same article, "In any case, says the science history professor, 'this is the first occasion I've ever discovered where someone discovered something and immediately decided to blow it up.'" There is also a declassified film about the Starfish Prme Event linked in the article.