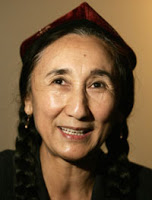 from afp: Exiled Uighur leader Rebiya Kadeer Monday accused China of fabricating alleged plots against the Olympics, and even of scheming to carry out its own terror attacks, to blacken her community's name.

"It's completely untrue. All these allegations are falsified," the separatist figurehead, who joined her US-based husband in 2005 after six years in a Chinese jail, told AFP through an interpreter.

"The real goal of the Chinese government is to organize a terrorist attack so that it can increase its crackdown on the Uighur people," the 61-year-old head of the Uyghur American Association said.