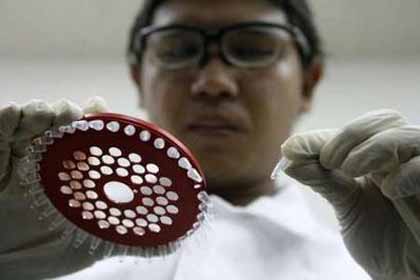 from japantimes.com: A team of researchers at an Osaka University institute said Tuesday
they have developed a kit that can diagnose infection with new strains
of flu in about 5 minutes through the identification of genes and
proteins in the virus.

Although the university’s Institute of Scientific and Industrial
Research designed the kit for the H1N1 strain of flu virus, it can also
be used for other varieties as well. The researchers hope the kit will
be used at international airports during potential flu epidemics.

So far, flu detection has relied on time-consuming measures such as
the so-called PCR protocol, which needs to amplify copies of a DNA
sequence, and immunochromatography, which examines the protein of the
virus through antibodies.

The development by the team can simultaneously detect the nuclear
protein of the virus and the gene sequences that are shared by many of
the H1N1 virus strains.

By changing the antibodies of the nuclear protein and the combination
of molecules that bind to the gene, the kit can also be used to detect
the H7N9 and H5N1 strains — which are resistant to anti-flu medicine
such as Tamiflu — and the dengue fever virus.

“The kit is distinguished by its ability to quickly diagnose
different types of viruses. We hope to bring it to the market soon,”
said Kunihiro Kaihatsu, a specially appointed associate professor at the
institute.