resistance is growing against the new financial world order

people all over the world are starting to wake up & speak up against the wars & against the banksters... but is it too little too late?

from cns news: President Barack Obama’s war policies in Iraq and Afghanistan are criminal and worse than those of former President Bush, according to Adam Kokesh, who serves on the board of directors of the anti-war group Iraq Veterans Against the War (IVAW)... “In some ways, Obama is worse than Bush,” Kokesh told CNSNews.com. “Bush wasn’t proposing a surge in Afghanistan – and Bush was talking about a quicker timeline for withdrawal than Obama... I’m not disappointed because I never had any hope in him,” said Kokesh. “All of the predictions of those of us who read the fine print about Obama have come true. During the primaries he sold himself very vaguely as a peace candidate and said he wanted to end the occupations... But when that congealed into something specific, I could see right away he really had no interest in reforming foreign policy or ending these occupations,” Kokesh said... When it comes to war policy, there were a number of presidential candidates who would have been better than Obama, including 2008 candidates Rep. Dennis Kucinich (D-Ohio), former Sen. John Edwards (D-N.C.), and Rep. Ron Paul (R-Texas), said Kokesh.

from ap: Hundreds of war protesters from across the U.S. gathered in Washington on Saturday to mark the sixth anniversary of the invasion of Iraq... Protesters demanded that President Barack Obama immediately withdraw all U.S. troops from Iraq, saying thousands of Iraqis have died and thousands of American troops have been killed or wounded. Protesters lined up about 100 cardboard coffins on the ground draped with flags, including the American flag, representing countries where the U.S. has taken military action. Anti-war activists said even though former President George W. Bush is out of power, they are disappointed with what they see as stalled action from Obama. Several of them said they supported Obama during his campaign, but that his administration has let them down by not ending the war sooner.

dodd in the hot seat over aig 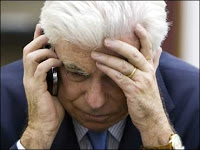 from ap: ... While [Christopher] Dodd, 64, has only recently found himself in the nation's political hot seat because of his role in the AIG bonus debacle, it has become clear that his issues with voters back home have been festering for two years. The AIG controversy appears to have exacerbated his popularity problems. "His numbers started to fall two years ago, and it had nothing to do with the economy," said Quinnipiac University Poll Director Douglas Schwartz. "It's been a cumulative effect that has brought him down." Dodd's decision to move his family to Iowa to campaign for a doomed bid for president, his initial refusal to release documents of his two controversial mortgages with Countrywide, criticism of how he financed a vacation cottage in Ireland, and now his involvement as Senate Banking Committee chairman in the bill that ultimately protected bonuses for executives at insurance giant AIG have all taken their toll. A takedown of a national party figure like Dodd would be a coup for Republicans eager to rebound from their recent congressional losses. "This is a state we will be actively participating in," said Amber Wilkerson, a spokeswoman for the National Republican Senatorial Committee.

why it's getting harder to evade taxes
(a message from the man warning you not to try it)
from time: Politicians don't usually like being interrupted during interviews. But sometimes it's worth making an exception. During a sit-down conversation with TIME last week, British Prime Minister Gordon Brown happily broke off to read a faxed letter handed to him by an aide. As anticipated, the note, from the Swiss President, brought welcome news: Switzerland was finally relaxing its decades-old banking-secrecy laws. "That is a major step forward," Brown enthused, brandishing the fax between his fingers. "This," he said, marks "the beginning of the end of tax havens." That may be too optimistic. There will always be some corner of the globe offering itself up as a place people can squirrel away their money. But Brown is right that Switzerland's decision to share information with other countries in cases of suspected tax evasion is revolutionary, not least because the Alpine nation's identity is so closely tied to its famously discreet banks. And Switzerland wasn't the only one making concessions last week. Andorra, Austria, Liechtenstein and Luxembourg all pledged to meet the same international standards on cooperation. Singapore and Hong Kong had promised much the same a few days earlier.

g20 protesters 'will try to bring london to standstill'

from independent: Next month's G20 summit will present an "unprecedented" challenge as up to 2,000 protesters attempt to bring London to a standstill, the Metropolitan Police admitted yesterday. The 20 world leaders, including Barack Obama, are to visit the capital for the summit on 2 and 3 April. They plan to discuss ways to tackle the global financial crisis. But their presence is expected to encourage a large number of protests, with scores of activists from an array of different causes determined to generate publicity from demonstrations around the event.

california capital to close tent city
(but the obamavilles will keep growing)
from dpa: A tent city that sprang up in the California state capital of Sacramento and became a symbol of the country's desperate economic plight is to be closed within three weeks, the Sacramento Bee reported Friday. Mayor Kevin Johnston said the plan was to move hundreds of the tent city residents to 'safer, more sanitary' quarters and cordon off the pasture which they had called home. The makeshift settlement got international attention last month when TV chat queen Oprah Winfrey filmed a segment at the site showing the deplorable conditions, with people living without running water, electricity or toilets. Though the camp was seen as a stark illustration of the impact of the housing crisis, local reports have noted that most of its occupants have been homeless for years and that only a handful are people who have recently lost their jobs and homes due to the current economic crisis. Johnson said the city has identified 150 beds that can be used immediately for temporary and permanent housing for tent city residents, while other members of the camp could be housed in modular units at an exhibition center or in subsidized 'shared housing' apartments.

army dispatched in response to november 'end the fed' protests