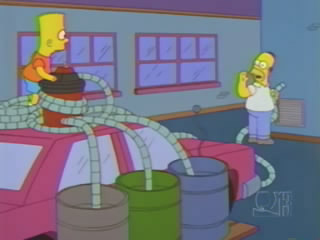 from smh: Companies that collect used cooking grease from US restaurants have turned to all forms of sleuthing in recent years. Private investigators. Surveillance cameras. And still containers full of used fryer oil are slipping through their fingers. For years, restaurants had to pay companies to take away the old grease, which was used mostly in animal feed. Some gave it away to local hoons, who used it to make biodiesel for their converted car engines. But with a demand for biofuel rising, fryer oil now trades on a booming commodities market, commanding about US40¢ per 450 grams. "It's very difficult to get district attorneys to take it seriously," the head of the California state agency that regulates the disposal of grease, Douglas Hepper, said. "They're busy with murders and meth labs and they have limited budgets themselves, so they have to set priorities." Few cases go to trial, and when they do, the offenders often get off with no more than a small fine, he said. An episode of The Simpsons has Homer Simpson trying to make a quick buck selling grease, but for years authorities seemed unaware that fryer oil was being stolen.