restored ‘trip to the moon’ debuts on cannes opening night 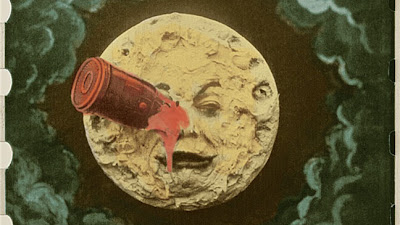 from hollywood reporter: Before CGI and 3D, there was French film pioneer Georges Melies, the forerunner of modern-day movie magic. His newly restored 1902 short A Trip to the Moon will precede Woody Allen’s Midnight in Paris to open up this year’s Cannes Film Festival. A must for any film student or special effects lover, the 14-minute space fantasy was adapted by Melies from the work of Jules Verne, and shot in a studio he built in the Paris suburb of Montreuil. Filled with dazzling set pieces and uncanny visual trickery, the most iconic being an image of a rocket ship poking into the moon’s eye, the movie went on to achieve instant success both in France and the U.S.

The massive restoration, budgeted at E400,000 and jointly financed by Serge Bromberg’s Lobster Films (Henri-George Clouzot’s Inferno), the Groupama Gan Foundation and the Technicolor Foundation, began in 1993 when a rare, hand-tinted print was uncovered in Barcelona. In 1999, Lobster began digitizing the footage frame by frame, and over ten years and 13,000 frames later, the film can now be seen in a full-blown color version for the first time since its debut more than a century ago. Although silent film purists may gasp at the restorers’ choice to add a catchy soundtrack by French electro duo Air (Lost in Translation), Moon should continue its voyage after Cannes to play plenty of fests and film museums before it lands on DVD.