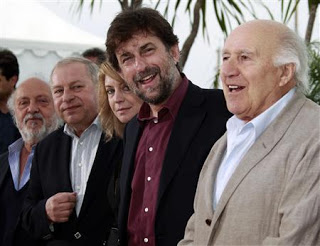 from reuters: The Vatican got a dose of Freudian analysis at Cannes on Friday with "Habemus Papam," a gentle Italian comedy about a newly elected pope who gets cold feet when the weight of his responsibility dawns on him.

The film by Italian director Nanni Moretti drew laughter and healthy applause from critics on day three of the Cannes film festival, where the official selection of movies has so far leaned in the direction of dark realism and social commentary.

Farcical and humane, Habemus Papam (We Have a Pope) casts wide open the door of the notoriously secretive Holy See, as red-robed cardinals converge in a locked chamber to elect a pope under the expectant gaze of millions of Catholics.

When the votes are counted and white smoke billows from the Vatican's dome, the pope-elect played by French actor Michel Piccoli, 85, is led to a balcony to address the faithful -- only to freeze up before his momentous task, paralysed by anxiety.