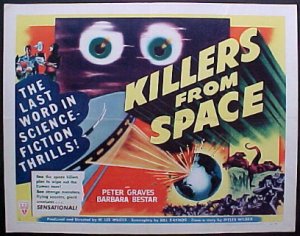 "Killers From Space" (1954) produced and directed by W. Lee Wilder starring Peter Graves and Barbara Bestar, according to Wikipedia, proves itself typically bad yet entertaining fifties sci-fi fare. The plot summary follows:  "Dr. Douglas Martin [Peter Graves] is a scientist working on atomic bomb tests. While collecting aerial data on an Air Force atomic blast at Soledad Flats, his plane crashes. He survives the crash unhurt, except for a strange scar on his chest."

"At the base hospital, he does not remember what happened. He acts so strangely that the authorities bring in the FBI...The FBI agent has followed him, but he escapes until he crashes his car. Back at the hospital, he is given truth serum. He tells a story about being captured by space aliens from Astron Delta and held in their underground base."

"The aliens plan to exterminate all humans with giant insects and reptiles, grown with radiation absorbed from the bomb tests...The FBI agent and the base commander are skeptical of such an incredible story, and keep him confined at the hospital."

"Dr. Martin does some calculations and determines that if he shuts off the power to Soledad Flats for just ten seconds, it will create an overload in the aliens' equipment. So he escapes the hospital and goes to the nearby electrical power plant, where he forces a technician to turn off the power. The alien base is destroyed in a massive explosion, saving the Earth from conquest," communicates well-done summary supplied as caption on You Tube.

Storyline represents predominant 1950s climate, where anything out of the ordinary, brings a person's sanity into question!  The movie may prove of interest as a period piece with pneumatic message tubes at the police station, full page fingerprints for comparison and verification, standard Bell-issue black rotary telephones, a Studebaker Commander (Martin's car), and a Crosley clock/radio on the Martin's bedstand.  You also see an A-bomb dropper B-29 Superfortress and people in open air seating to view nuclear test live with dark glasses as their only protection!

The best special effects are the alien ping-pong eyeballs and very good synching of reptiles with oversized screeching as if they were dinosaurs.  The examples may be more an indication how few effects there are actually!  "Killers From Space", a very politically incorrect title which would never fly as a banner these days, remains for all its faults inexplicably entertaining!  It's below and free!