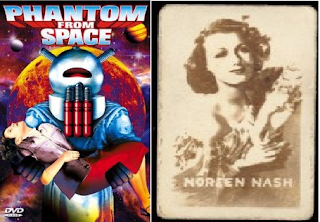 A low budget 1953 sci-fi film, "Phantom from Space," directed by W Lee Wilder, brother to famed directer Billy Wilder, screens story of brief visit by invisible alien,whose spacecraft ditches off California coast.  The film gets panned in reviews, but the present writer had similar experience provided by plot summary at answers.com below: "Phantom from Space is a far better film than its lurid title and skintight budget would indicate. The scene is Santa Monica, where the community is plagued by what seems to be a serial killer. Thanks to a pre-credits
sequence, the audience knows that the murderer is a visitor from outer
space, who becomes invisible upon shedding his spacesuit. Government
agent Hazen (Ted Cooper) teams with LAPD lieutenant Bowers (Harry Landers)
to track down the extraterrestrial fugitive. It gradually develops that
the space man is not a predator, merely a very frightened and defensive
individual, but by the time this realization is made, it's too late for
him. Efficiently directed by W. Lee Wilder
(Billy's brother), Phantom from Space boasts some very impressive
special effects for a film of its type, courtesy of special-effects
technician Alex Welden and optical effects specialist Howard Anderson. ~
Hal Erickson, Rovi."

In retrospect, most notable character is, perhaps, Noreen Nash as Barbara Randall, woman on DVD cover (picture) and commanded her own Topps magic movie star card (picture, right).  Nash began in Hollywood as a showgirl but catapulted her looks into a career, including author of a 1980 romance novel. Nash has a following due to her movie star good looks. The special effects range from less impressive at movie's start to very good if not excellent by film's end.  The final scenes when alien suffocates in Earth's atmosphere and humanoid form becomes visible to human eye are impressive for its time. It's an entertaining 72 minutes near height of UFO hysteria of early fifties. Admission is free to glimpse a time capsule from fifties below.