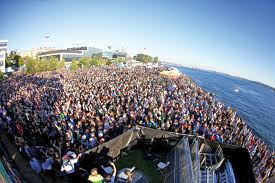 HempFest Turns 21: Tens of Thousands Rally for Legalization at Seattle Festival Ahead of November Ballot Measure

from ap: Tens of thousands of people descended on a waterfront park in Seattle Friday for the opening of what's billed as the nation's largest marijuana rally - an event that has a pressing political edge this year as Washington state's voters consider whether to legalize the fun use of pot for adults. Colorado, Oregon and Washington already have medical marijuana laws. And all three also have legalization measures on the November ballot. Washington's would allow sales of up to an ounce of dried marijuana at state-licensed stores and could bring the state nearly $2 billion in tax revenue over the next five years - if the federal government doesn't try to block the law from taking effect. Pot remains illegal under federal law. Washington's measure, Initiative 502, also would prevent nearly 10,000 marijuana possession arrests every year in the state, proponents say. "It looks like we're finally reaching a critical mass to end this critical mess," Hempfest director Vivian McPeak said as the festival began. "If I-502 passes, it'll be a historic moment." Organizers expected at least 150,000 people at the three-day event. Thousands milled along the 1.5-mile long park under a blazing sun Friday afternoon, stopping at booths advertising colorful glass pipes, hemp clothing and medical marijuana dispensaries. Young women shouted at passersby to encourage them to obtain medical marijuana authorizations - "Are you legal yet?" - while other festival goers rested on driftwood logs, lighting joints and pipes.