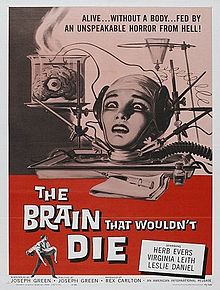 A 1962 release, “The Brain That Wouldn’t Die,” provides perfect pairing of macabre horror of the mad scientist variety with a bawdy burlesque element! It’s frankly almost optimum late night viewing for lounging couples! Young guys pull your girl close and don’t let her slip away as Dr Bill Cortner (Jason Evers) does with his fiancee Jan Compton (Virginia Leith), when he crashes his car on a hillside that results in her decapitation. Dr Cortner already conducting clandestine experiments seeks to save his love, now, by transplanting her head on another body. The doctor manages to revive the head (picture) with his formula in a basement lab, where a hapless one-armed surgeon Kurt aids Dr Cortner in his illicit work. Kurt waits his turn to receive a second functioning arm so he can resume his career; instead, falls prey to a mutant he helped create by sewing together discarded parts revived by the doctor’s formula. The highlight of the movie proves to be the search for a suitable body. It makes perfect sense to attend a “Body Beautiful” contest, but the doctor informed by a prospective donor picked up in route the winner is only the second most beautiful. Doris Powell possesses the most beautiful body, although her face remains disfigured by an attack suffered years earlier. Cortner loses no time by attending one of her modeling sessions with a promise to correct Doris’ disfigurement. Jan, who resents her condition, pleas with fiancee to quit insane pursuit as Cortner brings a drugged Powell into basement lab for the procedure. Jan, whose mental powers are enhanced by the formula, communicates with the mutant through telepathy and directed the beast previously to kill Kurt. The doctor gets snagged now, when he ventures too close to cell door holding the mutant. The mutant kills the doctor as he dislodges cell door, tipping over chemicals to set lab ablaze. The proverbial “beauty and the beast” scene ensues as the mutant rescues the drugged Powell, carrying her to safety. The final scene shows Jan/the head admonishing her fiancee, “I told you should have let me die!” A youthful viewer can appreciate script writers’ inventiveness in finding means of injecting sex into plot! You have to love those wholesome chicks from the fifties! Please drop below the fold for your viewing pleasure. Admission is free!