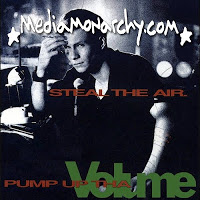 Previous: Episode032 - I Swung The Election

****************************************
♬Liner Notes♬: It's hard to believe we've already hit the very Masonic-sounding Episode033, but the weeks are flying by now. On a sad note, my first favorite band has called it quits after 35 years (hey, that's my age!) as INXS announced they will now cease touring (check the news links below for more info). But we're here and it's now so let's get ready for return spins of Benjamin Schoos and Black Moth Super Rainbow plus Mumford and Sons, Ben Sollee, Gulls and much more on the latest episode of Pump Up Tha Volume!

Menahan Street Band
"The Crossing"
'The Crossing'
Dunham, 2012
Note: "Brooklyn multi-instrumentalists Menahan Street Band continue to preserve soul and funk, and their new album The Crossing...offers a diverse collection of grooves. Opener "The Crossing" kicks it off with a smooth drum roll and soothing sax and strings that bob and weave into a track that's ready-made for a rapper..." Whoa, this is all instrumental? Count me in!
(More Info)

Tim Maia
"Ela Partiu"
'World Psychedelic Classics 4: Nobody Can Live Forever: The Existential Soul of Tim Maia'
Luaka Bop, 2012
Note: Song source KCRW informs us that "Tim Maia is Brazil's soul godfather, having introduced the genre into the cultural soundscape in the 70's. Today's Top Tune is a sample from the larger than life character. His personal story is the stuff of legend, with five marriages, several jail sentences and his participation in a spacey cult religion at the height of his career." This is a rare chance to get some background on a legendary artist right here on PUTV!
(More Info)

Body Language
"I'm A Mess"
'Grammar' EP
Lavish Habits, 2012
Note: Mixtape Maestro says that "On “I’m A Mess”, from the band’s latest EP Grammar, that same R&B-inspired formula that made “You Can” such a delight is tapped into yet again, though instead of a stylistic swipe at The-Dream, the vibe here feels more like a 90′s New Jack Swing updating on Motown gone Y4K."
(More Info)

Frightened Rabbit
"Off"
'State Hospital' EP
Atlantic, 2012
Note: Priming the pump in anticipation of a new fourth full-length album next year, the Scottish band collaborated with Ex-Arab Strap front man Aidan Moffat to release a new EP that Drowned In Sounds says "is the sound of a band renewed, invigorated and impassioned and pretty damned far from selling out... Not that this strays far from Frightened Rabbit’s established template: soaring choruses and driving lead, drums echoed and high in the mix behind emotive narratives of love and violence and regret."
(More Info)

Benjamin Schoos
"Je Ne Vois Que Vous" (w/ Laetitia Sadier)
'China Man vs China Girl'
Freaksville, 2012
Note: Last heard on Episode027 with Chrissie Hynde on vocals, the Frenchman returns with the one and only Laetitia Sadier of Stereolab! Waay back in February, the Guardian said "It's Sadier that lends her gorgeous vocals to the galloping, heart-burstingly lovely “Je Ne Vois Que Vous“... Inspired by orchestrator and Serge Gainsbourg collaborator Jean Claude Vannier, whom he met in 2006, it's a song that makes you want to run around the streets of Paris with a Super 8 camera and a coy but knowing smile on your face."
(More Info)

NO
"What's Your Name"
'What’s Your Name/Eleven Eleven' single
White Iris, 2012
Note: With the improbable name of NO, this Echo Park, Los Angeles band even scored the twitter account of @NO ! Sirens of Decay says "“What’s Your Name” has a great rhythm, and NO will immediately put you in mind of The National or maybe even Interpol. “What’s Your Name” isn’t quite an anthem, but it will drill it’s way into your subconscious quick as lightning. You’ll be singing and thumping your hands on the steering wheel in serious fashion."
(More Info)

Black Moth Super Rainbow
"Like a Sundae"
'Cobra Juicy'
Rad Cult, 2012
Note: We first heard from BMSR a few weeks ago on Episode030 and now the band is back with another track off 'Cobra Juicy' that Pitchfork says is "the balance achieved between the grotesque and the beautiful." They've even gotten the Hood Internet mashup treatment!
(More Info)

Mumford and Sons
"I Will Wait"
'Babel'
Glassnote, 2012
Note: The Examiner says this "English folk rock band Mumford & Sons performed their single "I Will Wait" on the CBS program "Late Show with David Letterman". Mumford & Sons' performance on the late-night talk show was in support of their most recent studio album, "Babel"... The song "I Will Wait" is the lead single from the band's second studio album, "Babel". The album was released on Sept. 21 and it debuted at No. 1 on the U.S. Billboard 200 chart." The album is a record-setting monster.
(More Info)

BNLX
"Vibrant"
'LP'
self-released, 2012
Note: The Minneapolis Star Tribune says about this duo's past and present: "Turns out those EPs were integral to the concept that Ed and Ashley had for their duo from the get-go, a vision somewhat blurred -- but in good ways -- by the recording of "LP." Now joined by drummer David Jarnstrom onstage, the couple will celebrate the release with a two-night "BNLX Fest" with eight of their favorite bands Friday and Saturday nights at Cause."
(More Info)

A Fine Frenzy
"Avalanches"
'Pines'
Virgin, 2012
Note: James Christopher Monger writes for AllMusic: "Inspired by a sojourn to the redwoods and Washington's Cascade mountains, Pines, which is accompanied by a companion e-book and short animated film, follows the story of a tree that's been given the gift of free will."
(More Info)

Rose Windows
"Heavenly Days"
'The Sun Dogs'
self-released, 2012
Note: Song source KEXP says the "appropriately-titled “Heavenly Days” is most representative of what you’ll hear on The Sun Dogs. With its warm harmonies and bright textures, this track will make you feel like frolicking outdoors, imagining that you’re surrounded by “red hills and green islands” instead of fallen leaves."
(More Info)

****************************************
@PumpUpThaVolume Music News:
INXS have stopped searching for a new frontman
@Spinner I always wished @INXS would've reverted back to being the Farriss Brothers after Michael died... (15th anniversary coming on Nov22)
@INXS Break Up After 35 Years
At age 15, I saw @INXS at my 1st real concert, the HFStival in Washington DC on July 3, 1993 w/ #ThePosies #IggyPop #StereoMCs #MatthewSweet
I thought this Backspace crowd wouldn't know how to react to Future of the Left, but people are digging it. Good going, kids!
@datfuckhead I listen to @PumpUpThaVolume podcast, which is roughly an hour of new music you can listen to. You're welcome.