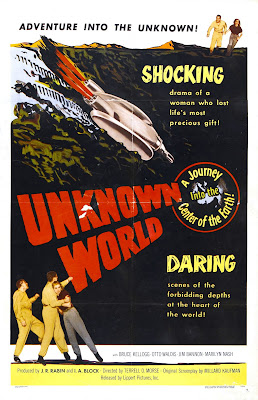 A virtually unknown sci-fi flick about an "Unknown World" reflects 1952 Cold War Era with gratuitous mushroom cloud in an opening scene.  The plot also reflects nuclear pessimism: "Dr. Jeremiah Morley (Victor Kilian) is concerned about an imminent nuclear war. He organizes an expedition of scientists and has them use an atomic-powered machine, capable of drilling through earth and stone, known as the Cyclotram, to find an underground environment where people could escape from nuclear obliteration," according to Wikipedia. Dennis Greisbach reviews movie at Monster Shack Movie Review, running it further into ground - if that's possible for a subterranean flick?  Greisbach has obvious fun and must admire his powers of observation, ripping apart "tech" aboard the Cyclotram - an array of up and down, start and stop buttons - not even dials!  Hey, at least, Cyclotram points up or down to appropriately reflect direction!   The movie includes usual financial issues as Dr Morley's "Society to Save Civilization" closes its doors due to a lack of funding - is that an omen or what?  The adventure is saved by a newspaper heir, played by Bruce Kellogg, who funds project in exchange for a seat aboard the Cyclotram!  Kellogg starring in this movie, is always, referenced as a minor actor and most notable achievement, appears to be marriage to singer Lucille Norman.  Jim Bannon, who sacrifices himself to save Kellogg in movie, married Bea Benaderet of Petticoat Junction fame, a marriage that produced two children.  Bannon best remembered as the fourth cinema Red Ryder star.  Marilyn Nash discovered by Charlie Chaplin, or perhaps, more accurately dis-covered on casting couch at the ripe age of 21, plays pixie scientist and love interest to Kellogg, who determines unknown world causes sterility, as a result, an unsuitable refuge from any surface calamity!  Kilian as Dr.Morley commits suicide near end of movie, when he realizes his mission has failed.  In real life, Kilian suffered Cold War paranoia and blacklisted for his political views later in the fifties.  You can get to know "Unknown World" by dropping below fold!  Admission is free!