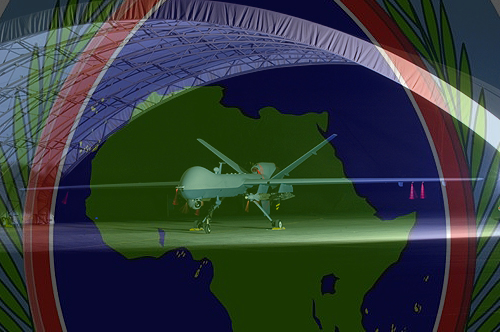 from StratRisks.com: The targeted killing of presumed terrorists by drones in
Africa has been largely conducted from US military bases in Germany, an
investigation by German TV channel ARD’s “Panorama” and the Süddeutsche Zeitung has revealed.


Particularly involved in running the drone missions are the
Stuttgart-based US military high command for Africa (Africom) and the US
Air Force’s Air Operations Center (AOC), located in Ramstein, in the
state of Rheinland-Pfalz.

Ten deadly drone attacks killing up to 29 people have so far been
carried out in Somalia by US forces. Most of those killed were believed
to be members of the militant Al Shabab, which aims to create an Islamic state on the Horn of Africa.

Since 2011 an air mission control center in Ramstein has been guiding US Air Force attacks in Africa including Somalia.
Up to 650 staff at the Ramstein control center monitor African air
space, evaluate pictures taken by drone and satellite, and plan new
missions. Without the special satellite relay station for unmanned
flying objects in Ramstein the drone attacks in Africa “could not be carried out,” according to a US Air Force internal memo.

Documents make clear that there are plans to replace an old facility
with a better, permanent one. U.S. Congress approved the equivalent of
8.4m euros for this in 2011. “Realizing this project will improve
satellite communication with drones long-term,” says the document.

When asked, a US military spokesperson said that generally responsibility for all military operations in
Africa — including the drone missions — lay with Africom in Stuttgart.
An internal memo shows that Africom is seeking to hire “secret service
analysts” whose task would be to “nominate” targets for drone missions
in Africa.

According to Thilo Marauhn, a Giessen-based specialist in
international law, the blatant involvement of Germany in a secret drone
program poses a number of potentially troubling legal issues. “The
killing of suspected individuals with the help of armed drones outside
an armed conflict situation” could, Marauhn said — if Germany’s
government knew about it but didn’t protest — constitute “being an
accessory in an abuse of international law.”

When questioned a spokesperson for the German government stated that the government had “no knowledge” of the fact that drone attacks were planned or carried out by US armed forces in Germany.

German constitutional law forbids military deployment that runs
counter to international law from within Germany’s territory. In the
specific instance however, the spokesperson said, the federal government
had “no frames of reference.”

According to secret services, a US drone attack carried out on Wednesday on the border between Afghanistan and Pakistan, killed the second in command of the Pakistani Taliban, Wali-ur Rehman.