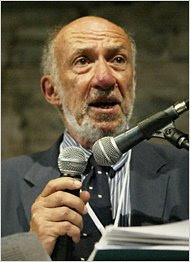 from nytimes: Israeli authorities on Monday expelled Richard Falk, a United Nations investigator of human rights in the Palestinian territories, saying he was unwelcome because of what the government has regarded as his hostile position toward Israel.

Mr. Falk, an American, arrived in Israel on Sunday. He was held at the airport and placed on the first available flight back to Geneva, his point of departure. A spokesman for the Israeli Foreign Ministry said that Mr. Falk had been informed in advance that his entry would be barred. Mr. Falk was not immediately available for comment.

Mr. Falk, a professor of international law at Princeton, has the title of United Nations Human Rights Council special rapporteur for the Palestinian territories. He has long been criticized in Israel for what many Israelis say are unfair and unpalatable views.

He has compared Israel’s treatment of the Palestinians to Nazi atrocities and has called for more serious examination of the conspiracy theories surrounding the Sept. 11 attacks. Pointing to discrepancies between the official version of events and other versions, he recently wrote that “only willful ignorance can maintain that the 9/11 narrative should be treated as a closed book.”