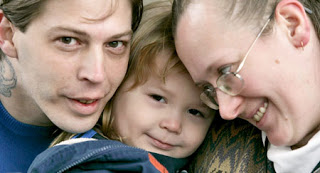 from ap: The father of 3-year-old Adolf Hitler Campbell, denied a birthday cake with the child's full name on it by one New Jersey supermarket, is asking for a little tolerance. Heath Campbell and his wife, Deborah, are upset not only with the decision made by the Greenwich ShopRite, but with an outpouring of angry Internet postings in response to a local newspaper article over the weekend on their flare-up over frosting.

"I think people need to take their heads out of the cloud they've been in and start focusing on the future and not on the past," Heath Campbell said Tuesday in an interview conducted in Easton, on the other side of the Delaware River from where the family lives in Hunterdon County, N.J.

Deborah Campbell, 25, said she phoned in her order last week to the ShopRite. When she told the bakery department she wanted her son's name spelled out, she was told to talk to a supervisor, who denied the request.

A store manager at ShopRite referred questions to a corporate spokeswoman who did not immediately return a phone message Tuesday. But spokeswoman Karen Meleta told The Easton Express-Times for Sunday's editions that the store considered Campbell's request inappropriate.

The Campbells ultimately got their cake decorated at a Wal-Mart in Pennsylvania, Deborah Campbell said.