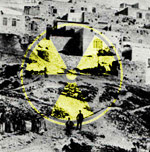 from google video/barry chamish: In 1951, the director general of the Israeli Health Ministry, Dr. Chaim Sheba flew to America and returned with 7 x-ray machines, supplied to him by the American army.

They were to be used in a mass atomic experiment with an entire generation of Sephardi youths to be used as guinea pigs. Every Sephardi child was to be given 35,000 times the maximum dose of x-rays through his head. For doing so, the American government paid the Israeli government 300 million Israeli liras a year. The entire Health budget was 60 million liras. The money paid by the Americans is equivalent to billions of dollars today.

To fool the parents of the victims, the children were taken away on "school trips" and their parents were later told the x-rays were a treatment for the scourge of scalpal ringworm. 6,000 of the children died shortly after their doses were given, while many of the rest developed cancers that killed them over time and are still killing them now. While living, the victims suffered from disorders such as epilepsy, amnesia, Alzheimer's disease, chronic headaches and psychosis.