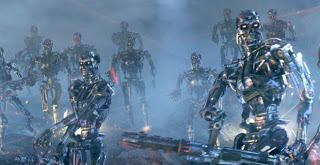 from danger room: The Army is looking to develop software and hardware that will let packs of robots chase down "non-cooperative human subject[s]." The machine team would be 3-5 'bots, each about 220 pounds, led by a flesh-and-blood officer. Well, at least until the robots have the brains to "intelligently and autonomously search for objects" on their own. Then, the Army promises, the machines won't just be good for hunting would-be John Connors. They'll take on more beneficial tasks, too, like "search and rescue, fire fighting, reconnaissance, and automated biological, [and] chemical and radiation sensing." See, nothing to worry about at all!

packs of robots will hunt down uncooperative humans 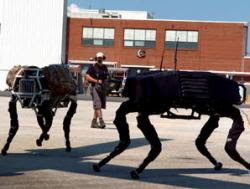 from new scientist: The latest request from the Pentagon jars the senses. At least, it did mine. They are looking for contractors to provide a "Multi-Robot Pursuit System" that will let packs of robots "search for and detect a non-cooperative human". One thing that really bugs defence chiefs is having their troops diverted from other duties to control robots. So having a pack of them controlled by one person makes logistical sense. But I'm concerned about where this technology will end up. Given that iRobot last year struck a deal with Taser International to mount stun weapons on its military robots, how long before we see packs of droids hunting down pesky demonstrators with paralysing weapons?