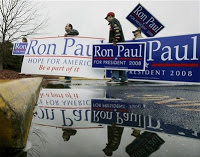 from paul joseph watson: Congressman Ron Paul has called on his supporters to organize a march on Washington DC, admitting that such a move would be “risky” but impossible for the media to ignore and could have a big impact on the eve of the Republican convention.

In a campaign update posted on You Tube last night, the Texan outlined his thinking behind the plan.

“One of the projects that I’ve been working on in my mind and in my head that I want to share with you….we ought to make a grand display, we ought to have a true march to show what our numbers are,” said Paul, adding that such a move would be “risky”.