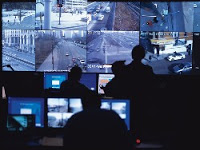 spy cams go live in the district of criminals

from washington post: D.C. police are now watching live images from dozens of surveillance cameras posted in high-crime parts of the city, hoping to respond faster to shootings, robberies and other offenses and catch suspects before they get away.

Since August 2006, the city has installed 73 cameras across the city, mostly on utility poles, at a cost of about $4 million. But until recently, officers were using them mainly as an investigative tool - checking the recordings after crimes were committed in hopes of turning up leads and evidence.

Police Chief Cathy L. Lanier said she thought the department wasn't making the most of the technology and was missing opportunities to more quickly solve crimes - or even stop them in progress. "I thought, 'Why the heck aren't we watching them?'" Lanier said.