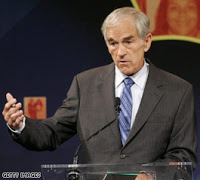 Ron Paul's 114 percent increase is in stark contrast to the decrease suffered by Mitt Romney, Rudy Giuliani, and John McCain. Romney's fundraising was down 29 percent. Giuliani was down 40 percent. McCain was down 55 percent.

from cnn: He's locked in low single digits in most polls, but Texas Rep. Ron Paul raised more than $5 million for his presidential bid in the third quarter, roughly equal to or just short of several of his higher -profile rivals...

Paul's fundraising total is a 114% increase over what he raised last quarter and is also only $2 million shy of what Democratic White House hopeful John Edwards raised during the same period. It is also roughly equal to the fundraising totals of Arizona Sen. John McCain and New Mexico Gov. Bill Richardson.

from forbes: Editor's Note: We offered all the presidential candidates an opportunity to answer our questionnaire and provide us with a short essay on their campaign platform. Ron Paul was one of the candidates who responded to our request. Except for minor copy corrections, the following is his unedited essay in its entirety.

"Congress should dramatically reduce its overseas commitments, as well as spending in areas like corporate welfare, and devote one-half of the savings to debt reduction and the other half to transitioning to a market system of retirement security and health care. This action will allow the government to meet its obligation to those relying on Social Security and Medicare while allowing younger people to escape the mountains of debt we are leaving-$60 trillion of liabilities.

As president, one of my priorities will be restoring the 10th amendment and federalism. Decisions about issues like civil unions or right-to-die legislation should be made by the states, not the federal government. I will stop federal judges from imposing new definitions on the States. I will also return control over education to parents and local communities. Decisions about whether or not to fund vouchers, have merit pay for teachers or extend the school year should be made by parents and local school boards, not by D.C.-based bureaucrats.